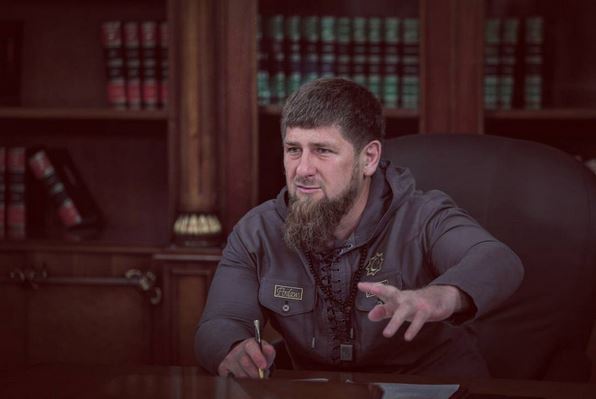 Mr. Kadyrov is president of Chechnya, a place where police are kidnapping, torturing, and killing men who are believed to be gay. These attacks are performed by Kadyrov’s personal militia, known in Chechnya as the Kadyrovtsy.

Russia has historically been a Christian nation (i.e., the Russian Orthodox Church), but Chechnya’s population is mostly Muslim, so Russia acknowledges their cultural differences and lets Chechnya take care of some of their own governmental affairs. Also, Chechnya is a total mess and their economy is in shambles, so Russia gives them millions and millions of dollars to survive.

Kadyrov has been President of Chechnya since 2007, although he has held power there for much longer than that. Ramzan’s father, Akhmad Kadyrov, was a high-ranking Muslim cleric in Chechnya; after Russia beat down the terribly violent wars of the 1990’s when Chechnya tried to fight for independence, Akhmad was “elected” president, as approved by the Russian government. But then Akhmad was assasinated in 2004 by persistent Chechen rebels, so now his son Ramzan is in charge. Since Ramzan took over, the fighting for independence has calmed down. And Ramzan is delighted that Chechnya is a Russian republic again. 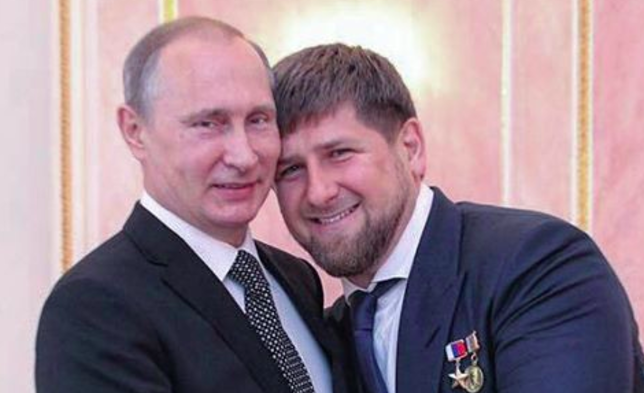 That’s Russian President Vladimir Putin on the left, looking absolutely thrilled to be getting such a big hug from his buddy President Kadyrov.

The photo above (like all the photos in this story) is a screen shot from Kadyrov’s personal Instagram account, where he currently has 2.6 million followers, and he uses it to post Chechen propaganda, pics with sports heroes and video clips of himself generally being a badass. He enjoys boxing and wrestling, and posts occasional wrestling videos with visible peen details. In 2015, he made an action movie (thanks for the money, Russia!), and of course he was the star, so he shared movie clips of himself fighting bad guys, wrestling alligators, and the other cool stuff that a Chechen hero would do. (The trailer for that awesome movie is here.)

But perhaps the only thing that makes Kadyrov happier than hugging Vladimir Putin is… hugging cats.

After becoming president, Ramzan continued his father’s plans for Chechnya to follow an extremist interpretation of Sharia law. And just so everyone is clear, let’s address some vocabulary here.  “Sharia” refers to the rules, traditions, and moral codes of Muslim life, and they are based on two sources: teachings that are written in the Quran, which is Islam’s holy text, and of the examples set by The Prophet Mohammad, who is the central religious figure of Islam. Like any religion, there are lots of interpretations of Sharia, and of Islam in general. Some Muslims follow interpretations of Islam that are rather liberal. Muslims in Chechnya who follow Kadyrov’s militant interpretations of Sharia are not liberal, at all.

Kadyrov’s rise through the Chechen political ranks has not been a pleasant experience for his citizens. He has been accused by multiple credible sources of the murder, kidnapping, and torture of his political adversaries, everyone from prominent political figures murdered while walking down the street to groups of rebel fighters rounded up and never seen again. Stories reported in the press, including The New York Times, detail how people kept in “prisons” (translation: torture chambers) were beaten to death, sodomized with shovel handles, electrocuted, and otherwise made miserable.

Some accusers claim Kadyrov was occasionally in the room while it happened, even participating in the beatings. Then there are reports that homes of suspected rebels were burned, often with the families still inside. Many of the people imprisoned and tortured claim they were targeted for no reason, including this teacher who was beaten daily by soldiers; on one particularly nasty day, a soldier cut off the teacher’s ear, just for dramatic effect. Whether Kadyrov organized the abuse, or if he just knew about it and did not stop it, is a matter of debate. But there doesn’t seem to be much doubt that he had a significant role in how it all played out.

Kadyrov nonetheless cultivates a friendly public image, and not just with his Instagram pics. To celebrate his thirty-fifth birthday, Kadyrov threw a fabulous birthday party complete with celebrities, paying Hillary Swank to be one of his guests of honor. Why Hilary Swank? Perhaps because Kadyrov likes boxing, and Swank had recently won her second Oscar award for Best Actress as a female boxer in Million Dollar Baby. And because, well, Hilary Swank is hot. Kadyrov probably had not seen her previous Oscar-winning performance, as a transgender man in Boys Don’t Cry, although he probably would not have objected her character deserved to be raped and murdered as punishment for such a life. Swank should have Googled “Who is Ramdan Kadyrov?” before she accepted money to show up at his party; she claims (and undoubtedly she was telling the truth) she had no idea of his violent tendencies. When reports about her trip to Chechnya surfaced in the news, with details about those prisons and Kadyrov’s political adversaries who were mysteriously found dead, Swank apologized publicly and fired her management team.

That’s not Hilary Swank. That’s actress Elizabeth Hurley, on the bottom left, who visited with Kadyrov on another day. No word about her knowledge of Kadyrov’s accusations of torture.

Much of the torture in Chechnya is carried out by members of Kadyrov’s personal security force, called quite logically the Kadyrovtsy, who are basically a poorly-trained but well-funded (thanks for the money, Russia!) group of thugs who patrol the streets to sniff out any anti-Russian rebels who have dreams of causing separatist trouble. Occasionally the Kadyrovtsy catch rebels and decapitate them, and hang their heads on poles in the middle of town as a warning. But more often, rebels have turned up dead in mass graves, wrapped in barbed wire or showing other signs of torture before they were executed. And sometimes, oops, the graves had civilians, including children.

Particularly energetic members of the Kadyrovtsy also act as an informal religious police, implementing torture as punishment for breaking Kadyrov’s version of Sharia laws. For example, The New York Times reported the abduction and abuse of a married Muslim woman who was accused of having extramarital sex with a Christian man; local Kadyrovtsy “law enforcement” officials shaved her hair and eyebrows, painted her head green with a cross on her forehead, and paraded her around town. And of course they beat her.

That brings us to the latest news of people being rounded up and tortured: Chechnya’s gay men. Although the major cities like Moscow have thriving LGBTQ culture, being a member of this community in Russia can be tough. (If you have no reason to be happy for a few days, watch the documentary Hunted: The War Against Gays In Russia.) But the violence in Chechnya is another level: authorities (Kadyrovtsy, most likely) placed fake ads on “social networking sites” and invited Chechen men to meet. When men fell for the trap, they were handcuffed with sacks over their heads and brought to those infamous prisons, where for days they were beaten and electrocuted and subjected to all sorts of horrors. So far, there is documentation that three men have been murdered, but hundreds more have survived the prisons, and many are being evacuated from Chechnya with the help of Russian human rights organizations. 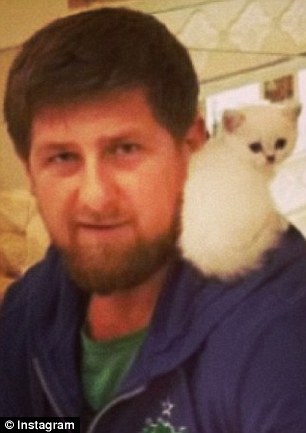 Chechnya’s current campaign against men identified as gay, and targeted by those Kadyrovtsy henchmen, is appalling on two levels: first, just the fact that it is happening, and second because it is merely one more horrific example of life in a country where so many people have been tortured before this.

Of course Kadyrov denies any involvement, or even that it is happening, because he says gay men don’t exist in Chechnya. “You cannot arrest or repress people who just don’t exist in the republic,” Alvi Karimov, a spokesperson for Kadyrov, told the international news agency Interfax.

If Kadyrov’s forces continue this campaign, that statement may become true.