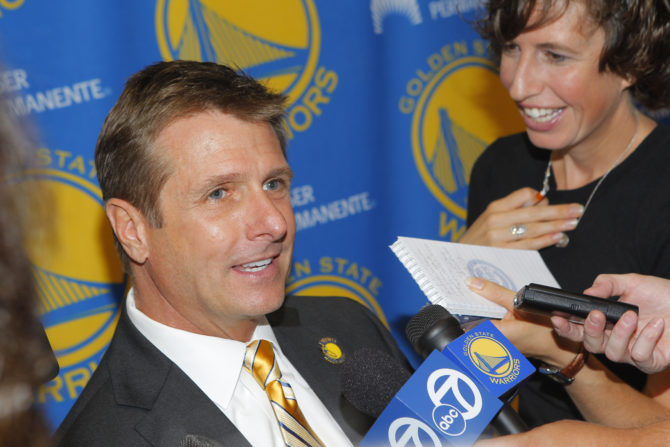 When you think of a legendary sports team, its star players obviously come to mind first. Take the Golden State Warriors, who won their 2nd NBA title in three years Monday night. Kevin Durant and Steph Curry deserve the spotlight and then some, but there’s a behind-the-scenes member of the franchise who’s piqued our interest following the Warriors’ big win.

Rick Welts has been the president and COO of the Golden State Warriors since 2011, the same year he came out publicly as gay in an interview with the New York Times.

At the time, the Times wrote:

“This is one of the last industries where the subject is off limits,” said Mr. Welts, who stands now as a true rarity, a man prominently employed in professional men’s team sports, willing to declare his homosexuality. “Nobody’s comfortable in engaging in a conversation.”

And while Welts signed with the Warriors the same year he came out, it’s significant that the coming out happened first. The Warriors hired Welts because he excels at his career, knowing full well they were signing one of the only out executives in professional basketball.

Welts is often the public face of the team. Here’s a snippet from their website:

“The organization has won numerous awards across all facets of the business in recent years, including in May 2014 when the Warriors were named “Sports Team of the Year” by the Sports Business Journal/Daily, with Welts accepting the award on behalf of the organization at the Seventh Annual Sports Business Awards in New York City.”

Congratulations to the Warriors for their enormous win, and to Welts for helping to move the needle on acceptance within professional sports.

A win/win! (Unless of course you’re a Cavaliers fan.)