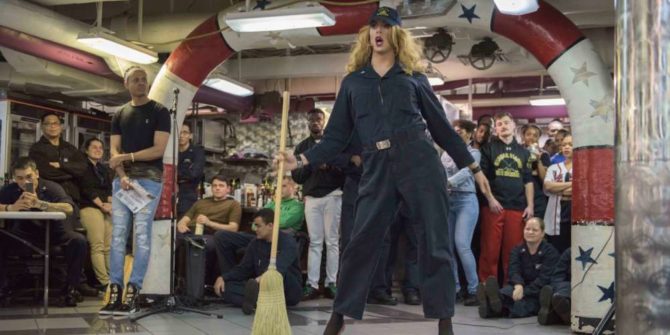 Serving in the Navy can be a drag…and that’s not a bad thing.

Joshua Kelley knows how to serve it up to his fellow seamen.  The administrative supervisor aboard a ship off the coast of Japan, Kelley has taken on a dual identity, that of Harpy Daniels (no relation to Stormy), a fierce drag queen with a knack for doing the splits. And his fellow sailors love it.

Kelley first made his debut as Harpy as part of a competition sponsored by the Navy’s Morale, Welfare and Recreation department. With a $1,000 gift card on the line, Kelly donned a wig and heels as part of a lip-sync competition. A star was born; Kelley’s audience loved his athletic choreography and drag performance. Now Harpy Daniels makes frequent appearances to entertain her fellow shipmates, and Kelley performs without fear of being attacked for his sexual orientation, or for being too effeminate.

Who loves Cake in bed????? the flavore looks fishy but it’s sweet like a peach! ? thank you @trraceeee for the pic

“I have many LGBT friends here, and if you can stand at attention properly and speak with proper etiquette, that’s what it comes down to in the Navy,” he tells NBC News. “No one tells me I’m too feminine. I’ve not once had a bad experience as a gay man in the military.”

And now we wait by the giving tree!

Kelley grew up in Pennsylvania as half of a set of twins. In high school, he joined the drama department and color guard to nurture his love of performing for an audience, and his knack for fabulousness. He admits that it took his parents some time before they adjusted to his performing in drag, though once they saw him perform, they couldn’t resist. “[My dad] cried and said, ‘I didn’t know what this was,” Kelley says. “I didn’t know it was all this joy.”

Today Kelley, as Harpy Daniels, continues to entertain his shipmates with frequent appearances in lip-sync competitions, sending a message that a can entertain and serve his country…even while wearing heels.