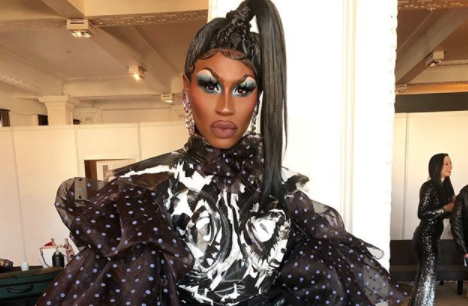 Jaren Merrell has captivated drag fans as Shea Couleé, first as a finalist on season nine of RuPaul’s Drag Race and now riding a new wave of momentum on season five of All Stars. But the Chicago-based queen is much more than a pretty face (and let’s be real a standout triple-threat talent). Couleé has long emphasized the importance of using their platform to inspire and uplift queer people of color to feel confident in their identities and hasn’t shied away from addressing racism in the drag community and the world at large.

With the All Stars spotlight coinciding with a renewed wave of Black Lives Matter activism, they have doubled down on that responsibility with aplomb.

That started with speaking candidly to fans about their conflicting feelings as All Stars premiered in the wake of COVID-19 and the national outrage sparked by George Floyd‘s murder at the hands of Minneapolis police. In an Instagram post, Couleé wrote:

I have struggled…with the desire to share and celebrate my return to All Stars, and a sense of guilt in feeling that would be too self serving during these incredibly sensitive times. I with I had a proper answer, but I am still learning. In this moment however, I do feel that sharing successful black stories is an important tool in creating hope for the younger Queer POC who watch the show looking for inspiration.

And while their story is certainly an inspiration, Couleé has emphasized how vital it is for QPOC to seize this moment of change. In addition to leveraging social media to raise awareness of the injustices afflicting Black Americans, they gave a particularly powerful speech at the Chicago Drag March for Change protest earlier this month in support of BLM, telling the crowd:

We are Black, we are queer and we deserve to take up space…My value shouldn’t be wrapped up in my talent. My value should not be wrapped up in Instagram followers. My value should be strictly based on the fact that I’m a human being walking this earth right next to you…You want to show up? Y’all need to hire Black people in your bars. And I’m not just talking about to wipe up your drinks, I’m talking about I want to see Black managers. I want to see Black people decide who gets to come in and who gets to make the money. And while we’re at it, we need to get a f*cking Black-owned bar up in this b*tch…My name is Shea Couleé and I didn’t come to play; I came to dismantle white supremacy.