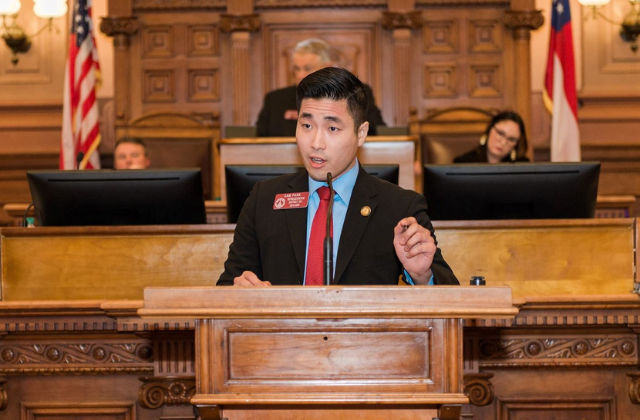 The 34-year-old is currently running for his third term in Georgia’s general assembly. In 2016, he did what many believed to be impossible when he flipped a red district blue.

“I ran against a three-term, very well respected Republican chairwoman, most folks on both sides of the aisle thought I had no shot,” Park recalls in a new interview with South Florida Gay News.

Although nobody seems less impressed by this than the candidate himself.

“I am actually quite representative of my district as an openly gay Asian American millennial,” Park says, humbly. “My district is majority-minority. It is very diverse and the median age is 36.”

Legislating during a pandemic ?. Keeping our distance & wearing our masks as we finish out this year’s legislative session in Georgia. Stay safe, y’all! #gapol

Since taking office, Park, who is the son of Korean immigrants, has been a champion for LGBTQ equality, a voice for HIV awareness, and a vocal opponent of religious freedom laws that are being abused by companies to justify their homophobic beliefs.

As Georgia’s first openly gay state representative, he understands better than anyone about the importance of having a seat at the table and a “voice in the room on issues like non-discrimination ordinances.”

The son of Korean immigrants and a proud member of the LGBTQ+ family, I know our communities are stronger when we unite across differences. So as #ImmigrantHeritageMonth AND #PrideMonth come to a close, let’s remember: Our diversity is our strength; our solidarity is our power. ?????

Park, who won his 2018 reelection with nearly 60% of the vote, has also spoken out in support of adding more LGBTQ content in the classroom and making sure sex ed classes are accurate and inclusive.

“My understanding is that Georgia does not have an LGBTQ curriculum for students,” Park says. “We’re still working to ensure that the sex education that’s taught is scientifically accurate.”

From all backgrounds, we came together in Gwinnett to say #BlackLivesMatter. United, we have the power to end hatred and violence against Americans because of the color of their skin. Together, we will heal the deep wounds of this nation and ensure equality and justice for all.

And when he’s not busy being a champion for LGBTQ people or running for reelection, Park is out marching in the streets for Black Lives Matter and rescuing lost kittens from danger.

Just last month, a stray cat showed up at his campaign headquarters. Park posted about it on Instagram, asking the cat’s owner to e-mail him personally so he could ensure it gets returned to its proper home.

When nobody responded, he adopted the kitten, naming her Mira and declaring her his new campaign manager.

So over the weekend, a lost kitty showed up on my doorstep to join my re-election campaign! ? If you know her family is looking for her or who she belongs to, plz email me at [email protected] Otherwise, meet my new campaign manager! Any thoughts on names? #StandWithSam

This week, Park was endorsed by Stacey Abrams. He will face off against Republican Carol Field in November.