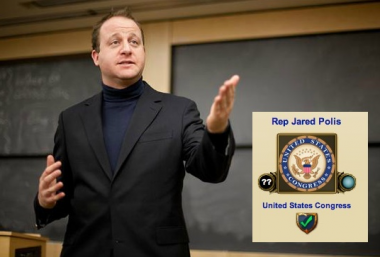 Till now, we’ve known Jared Polis as one of the few openly gay members of Congress, the Democratic Representative from Colorado who sits on the Committee on Rules and the House Democratic Steering and Policy Committee., and who proposed the Every Child Deserves A Family Act, which would ban discrimination in adoption or foster care based on sexual orientation, marital status or gender identity.

But it turns out Polis is also a staunch opponent of the Stop Online Piracy Act (SOPA), a proposed measure that would allow the Justice Department to file court orders against websites accused of copyright infringement and make unlicensed streaming of content a criminal offense complete with jail term.

Supporters say the bill protects copyright holders but opponents say it will be abused, threaten free speech and basically bring the Internet to a screeching halt. Many sites, including Reddit and the English-language version of Wikipedia are planning blackouts today in protest of the measure. (Google is standing in solidarity with a blacked-out banner)

We can imagine instances where SOPA would wind up harming gay educators and activists, but it seems like Polis’ stake is connected to another facet of his life: He’s a big gamer and he thinks SOPA will kill the industry.

He explained his opposition in a statement:

Hi, this is Congressman Jared Polis of Colorado. As a member of the League of Legends community (partial to Anivia and Maokai), and as someone who made his living as an Internet entrepreneur before being elected to Congress, I’m greatly concerned about the future of the Internet and gaming if Congress doesn’t wake up. You may have heard that Congress is currently considering a bill called the Stop Online Piracy Act, or SOPA.

While SOPA has a ton of problems, there are some significant issues that I thought fellow gamers might want to know about.

I’m particularly concerned that SOPA might stifle the kind of innovation that brings us games we love, such as LoL. The bill makes it far too easy for angry competitors to sue good law abiding companies out of existence. It threatens any company or website that depends on user-generated content, even companies like Riot. Instead of coming up with great ways to keep making games like LoL even better, companies will have to spend their money hiring lawyers. That’s why companies like Riot, who want to protect the games they create, are opposed to SOPA.

I’ve been working on alternative legislation that would protect the games companies create while also fostering innovation. But we also need you to call your members of Congress and let them know of your opposition to SOPA. This bill has a very real chance of passing, and it is up to all of who want to protect the Internet to take action. More information is available at http://keepthewebopen.com/. Please make your voices heard in this debate! I will be happy to respond to your posts below, and will check back every few hours today and respond to as many as I can.

We’ll have to wait and see if the blackout has any effect, but we’re not even sure Congress will notice: The House Judiciary Committee was supposed to continue debate on SOPA this month but since both Dems and Republicans are holding retreats over the next two weeks, it’s being tabled till February.

Hey, your lawmakers work hard. They need a vacation!