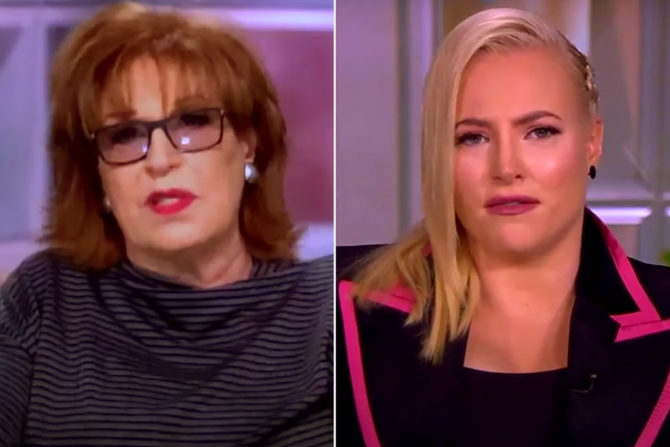 New mom Meghan McCain returned to The View this week after taking some time off for maternity leave and let’s just say things haven’t been going so well for her.

On Monday, McCain was ripped to shreds by her co-hosts when she said people should be “more respectful” toward MAGA supporters, saying it’s not nice to call racist people racist.

Then yesterday, she nearly broke down in tears after Joy Behar told her she wasn’t missed while she was away.

It all started when McCain interrupted Behar as she was talking about the in-fighting happening among Republicans.

“Let the Republicans fight amongst themselves,” Behar said, adding, “On the Democrats, you have the progressives versus the moderates, which is de rigueur as they say, it’s what it always is. … The Republicans are in much more trouble right now.”

“Are you kidding me?” McCain butted it. “You have AOC fighting about whether or not she’s going to end up primarying Chuck Schumer. … You have ‘the squad’ that’s coming out very angry that Biden hasn’t filled his Cabinet with more progressives.”

Things quickly took a turn for the worst when Behar replied with dead seriousness, “I did not. I did not miss you. Zero.”

McCain, clearly upset, replied, “Omigod. Ya know what, that was nasty. That was, like, so nasty. I was teasing because you said something rude. That’s so rude. Like, really?!”

“That is so rude!” McCain, who appeared near tears, replied.

.@JoyVBehar tells @MeghanMcCain: “I did not miss you” while you were off on maternity leave. “Zero!” pic.twitter.com/4D2IDWrF7k

Related: Meghan McCain gets owned for saying liberals need to be more tolerant of other people’s intolerance