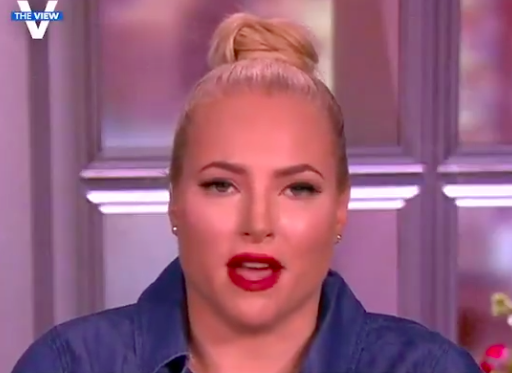 The day has finally (finally!) arrived.

Meghan McCain has officially departed The View, meaning we will no longer be subjected to her bad hair and daily reminders that she is, in fact, John McCain’s daughter.

“Thank you all so much again for the privilege and honor it has been for the past four years to work on this show,” McCain said, unconvincingly, in her departing message this morning. “It really has been incredible.”

.@MeghanMcCain shares her final words as co-host as she leaves @TheView: “Thank you all so much again for the privilege and honor it has been for the last four years to work on this show. It really has been incredible.”

She went on to thank her co-hosts– Whoopi Goldberg, Joy Behar, Sara Haines, and Sunny Hostin–for being so “incredible”, despite all the heated confrontations they had over the years, many of which ended with McCain making nasty personal attacks against her colleagues.

“I will always cherish the time I spent with all of you,” McCain said.

Judging by the forced smiles on each of her co-stars’ faces, the feeling isn’t mutual.

Later, McCain’s mother, Cindy, was brought on to talk about what a “wonderful job” her daughter did on the show.

“I love her independence,” Cindy McCain praised. “Her dad would be proud of her.”

(Her dad, in case you forgot, was John McCain.)

“We knew she had the ability to make waves or deal with controversy,” Cindy McCain continued, “and he also wanted her to have an opportunity to really express herself. It was really his suggestion and his idea that she do this when offered the job.”

.@cindymccain reflects on her daughter @MeghanMcCain’s time on @TheView, telling us that Sen. John McCain would be “so proud” of their daughter.

“I wish her the best in whatever endeavor she chooses to do.” https://t.co/kS1p3Jmn3v pic.twitter.com/lHYi5yJE8s

Meghan McCain said last month that she might delete her Twitter page when she leaves The View. We’ll let you know if/when that happens. No work yet on who will be replacing her when the show returns for its 25th season this fall.

In the meantime, here’s how people are responding to her departure…

Today is Meghan McCain’s LAST DAY on #TheView. The evil has been defeated! pic.twitter.com/E9VSQkn7PM

Meghan McCain has OFFICIALLY departed #TheView. Now she can take on the full-time job for which she is most qualified: John McCain's daughter.

The other cast members are like let’s just gets this show over and done with today #TheView pic.twitter.com/dafhphfdCl

Congratulations to The View for having it’s last bad hair day. #TheView

It's finally the last day of John McCain's daughter on #TheView pic.twitter.com/JCTPxkF0Qm

Co-hosts & staff as soon as Meghan’s out the door! #TheView pic.twitter.com/yRyENuJKd9

Thank God today is finally Meghan McCain’s last day on #TheView. Spreading lies and propaganda does not make it another point of view.

This is how most of us were during that segment ?? #TheView pic.twitter.com/OliDuFgonH

I’m sure she will love it if you flooded her tweets with this gif of Kamala waving goodbye ???????? pic.twitter.com/Iy9HPNkUHH