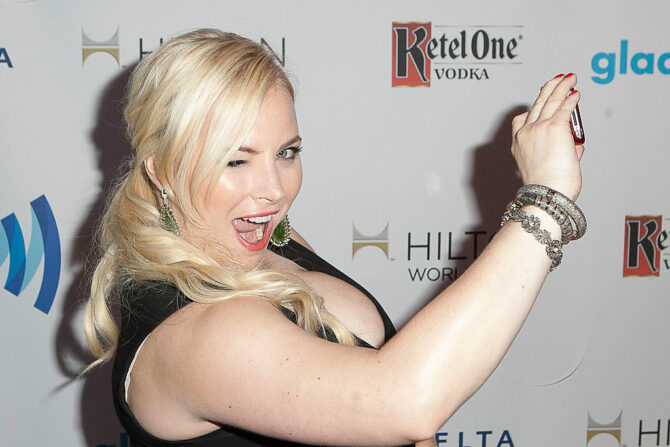 After being read for filth by Steve Schmidt over the weekend, Meghan McCain–who is John McCain’s daughter, in case anyone forgot–broke her silence by giving a random shout out to her gay best friend of Twitter late last night.

Related: Meghan McCain had an even worse weekend than Madison Cawthorn

At 9:53 p.m., McCain retweeted a photo of celebrity hairstylist Josh Rupley, along with the caption: “14 years!!!!!!! Met as babies on the campaign trail. I love you. Ride or die @josh_rupley”.

I love you. Ride or die @josh_rupley.

The “campaign trail” McCain appears to be referring to, of course, is her father’s 2008 presidential campaign, which Schmidt managed.

In his Twitter takedown of McCain, Schmidt accused the former The View co-host of being a “spoiled rotten, entitled bully” and “fourth generation wannabe” who is wholly “unaccomplished” in life.

“Everyone who has ever worked with Meghan McCain from ABC, The View, Joy Behar, Whoopi Goldberg and a thousand others have seen the unfiltered version of what the whole of America has seen,” he wrote, recalling the time he had her kicked off the campaign’s plane in 2008 “because of her outrageous behavior.”

“I was the first adult that Meghan McCain ever encountered that she heard the word NO from,” he continued in a new thread. “I told her she was unimportant and that the Presidential election wasn’t about her.”

From there, Schmit detailed how McCain’s own father “was appalled” by her behavior on the campaign trail. He also accused her of throwing “tantrums” that “were beyond anything I have ever witnessed from any other human being.”

“Raging, screaming, crying, at the staff, at the makeup people at Secret Service,” he wrote.

Schmidt’s takedown of McCain, who he accused of “14 years of abuse and attacks,” came after she liked a tweet calling him a pedophile. He has received high praise from both Democrats and Republicans alike for speaking out against her nonstop bullying.

That’s not what I heard. ☕️ pic.twitter.com/ZgDw4SxQW2

This reeks of desperation, “look at me I have a real friend!” 🙄

I like people who don’t have to prove they have friends.

Just goes to show not all gays have good taste. No better than log cabin gays. Voting against their own communities rights. We good. You can have him.

Steve has a message for you, Meghan! pic.twitter.com/J45plZuBwD

Your book against your father’s gravestone. This is gross. pic.twitter.com/Rm8xG4Vcvj

Watch your back. Meghan turns on her friends. Just saying.