The internet produces more rumors than anyone can reasonably keep up with, so we won’t fault you, or ourselves, for forgetting about this very important one from 2017: According to RuPaul’s Drag Race season 9 contestant Trinity the Tuck, not only was guest judge Meghan Trainor a bit rude on set, she also unflinchingly stole a contestant’s sandwich.

For some reason, this nearly 5-year-old accusation has found new life on social media, prompting a response from the “All About That Bass” singer herself.

Additionally, Trainor’s decision to wear a unicorn onesie at the judge’s table is also being re-criticized. This ticked off some viewers, apparently, but we say wear what makes you happy.

To recap, here’s what Trinity told The Sun about that whole sandwich theft incident:

The video found its way back to Trainor, who tried to clear the record on both counts.

“Lmao…why. Didn’t eat anyones sandwhich [sic] hahahaha i promise,” she commented, adding, “Also never meant to disrespect anyone. I was in the middle of my tour and had zero time to do a fitting and get an outfit and asked the show i could wear my unicorn onesie lol and they said yes. So sorry.” 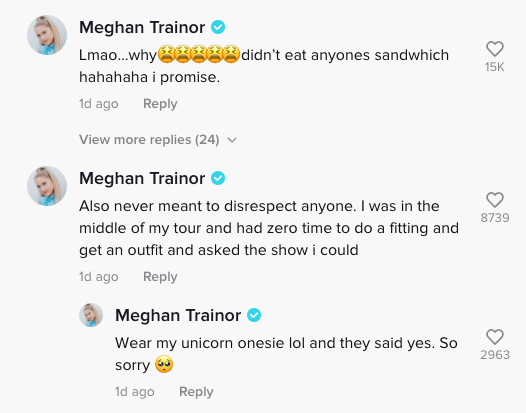