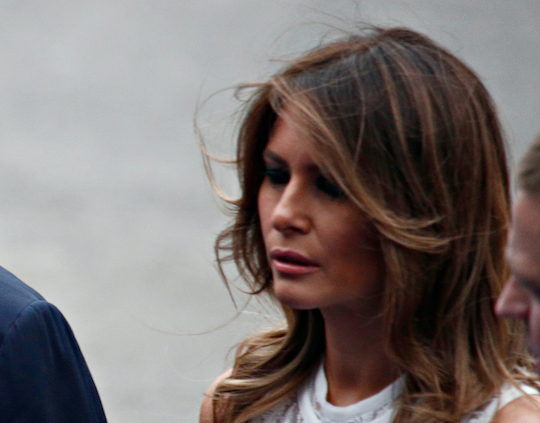 Like her stepdaughter Ivanka, Melania Trump appears to be accepting the fact that she’s still not welcome in New York City and will probably never be able to live there again. At least, not without feeling like a total pariah.

Multiple media outlets are reporting that the ex-FLOTUS and her son, Barron, will continue residing at Mar-a-Lago in Florida for at least another year, possibly longer.

The news comes amid reports that 15-year-old Barron will be attending Oxbridge Academy in Palm Beach next school year, after a note that was sent to parents earlier this week leaked to the press.

“We look forward to welcoming him into our school and community,” the prep school’s Director of Advancement, Scott Siegfried, said in a statement after the story broke.

Related: A whole bunch of tea is about to be spilled in this crazy new Melania doc

Earlier in the summer, Melania was seen (without her husband) looking happy and zipping around Manhattan for the first time since leaving Washington, D.C. in January.

She called the city home for most of her adult life, first moving there in 1996 and then stubbornly refusing to leave after her husband became President of the United States.

It wasn’t until six months into his first and only term that she begrudgingly agreed to give up her stylish New York City lifestyle and accept her fate as a D.C. political spouse and, now, a Florida housewife who lives at a golf club.

Last month, a source told People that Melania is “not dumb” and “knows how to handle her life to make it as fulfilling for her as possible.”