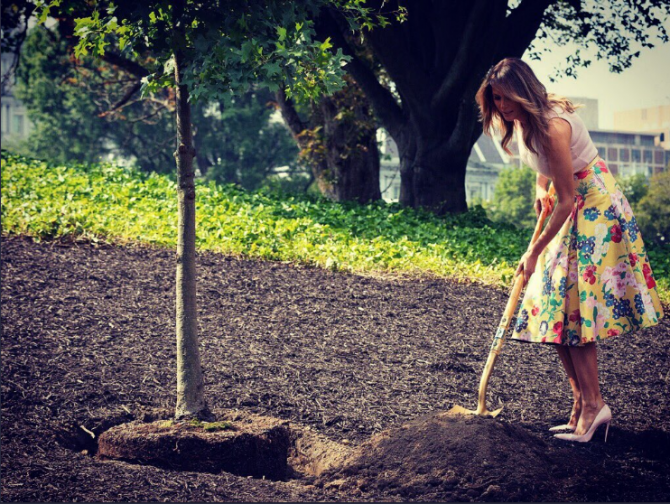 We’ve barely heard a peep from Melania Trump since she stepped off Air Force One at Palm Beach International Airport wearing a psychodelic caftan after departing the White House on Inauguration Day 2021.

In her first tweet in over a month, Melania blasted presidential historian Michael Beschloss yesterday for criticizing her for destroying the White House Rose Garden.

““.@BeschlossDC has proven his ignorance by showing a picture of the Rose Garden in its infancy,” she tweeted. “The Rose Garden is graced with a healthy & colorful blossoming of roses.”

She added, “His misleading information is dishonorable & he should never be trusted as a professional historian.”

.@BeschlossDC has proven his ignorance by showing a picture of the Rose Garden in its infancy. The Rose Garden is graced with a healthy & colorful blossoming of roses. His misleading information is dishonorable & he should never be trusted as a professional historian. https://t.co/LU243SANF1 pic.twitter.com/PuVOSjxx5w

Melania famously had the garden, which was originally planted by Jackie Kennedy in 1962, completely ripped out in 2019. She also had ten perfectly healthy crabapple trees removed for no reason. It was one of the few projects she actually accomplished as First Lady.

Three weeks after Melania unveiled the new garden design, it had to undergo emergency repairs after experiencing “some minor complications” after the grass was damaged beyond repair during the Republican National Convention, when hundreds of people trampled all over it.

“We want Jill Biden and Doug Emhoff to take this on and restore the Rose Garden to [former first lady Jackie Kennedy’s] original design,” the Change.org petition said, nothing that the renovations made by the Trump administration “ripped away” Kennedy’s legacy.

Biden and Emhoff have not responded to the petition.