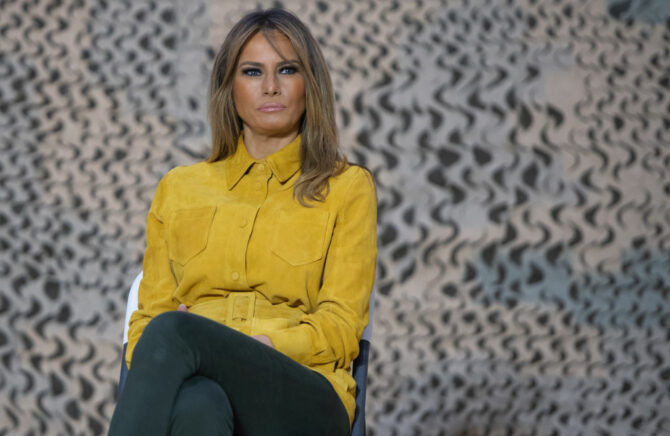 Melania Trump lashed out at reporters today, accusing them of try to “cancel” her and destroy the “hopes and dreams of children” after it was revealed she’s been promoting a “charity” event for a charity that doesn’t actually exist.

Earlier this month, the ex-FLOTUS announced she will be hosting a “high tea” in Naples, Florida in April. The event is being billed as a “benefit” for “Fostering the Future, a Be Best initiative,” which claims to award computer science scholarships to children aging out of the foster care system. Tickets range from $3,000 to $50,000.

As usual, Melania didn’t say how much of the funds raised would go to charity. But that’s not even the most egregious part of the story. Because according to Florida law, any organization soliciting donations in the state must be registered, and there is no charity named “Fostering the Future” or “Be Best” registered in the state.

Now, Melania is accusing the reports of being “inaccurate, misleading, and outright incorrect.”

In an angry statement posted to her website today, the ex-FLOTUS says, “The media has created a narrative whereby I am trying to act in an illegal or unethical manner. That portrayal is simply untrue and adversely affects the children I hope to support.”

She continues, “Those who attack my initiatives and create the appearance of impropriety are quite literally dream killers. They have canceled the hopes and dreams of children by trying to cancel me.”

In the statement, Melania also admits that she doesn’t actually operate a 501(c)(3) organization, and that she never meant to imply “Fostering the Future” was a charity when she announced she was hosting a fundraising event for it.

The statement also says that this isn’t the first time people have tried to thwart her “mission to support children”, and so she is “disappointed but not surprised.”

“I will continue to support our children and do whatever it takes,” it concludes, “remaining positive in the face of negativity.”

One of the “positive” things she appears to be focusing on in face of all the “negativity” is her blossoming NFT business.

Shortly before issuing her scathing statement attacking the press, she took to Twitter to promote NFTs for “10 original pieces of digital artwork, highlighting iconic moments from President Trump’s Administration.” But, as always, there’s a catch.

Buyers don’t actually get to see the artwork they are purchasing until after they win the bid. This, Melania says, creates a fun “element of surprise.”

The sale kicks off February 21, just in time for Presidents Day.

Are you also going to buy this collection? https://t.co/xdcUizqYUv

is this going to be another attempted grift where the people behind the project bid on your NFTs to drive up the price?

maybe next time make sure someone *else* wins the auction.

Why would a couple, who are billionaires many times over, need to hawk stuff?

I’m just here for the ratio and well deserved hatred.

The stench of desperation for money is overpowering.

Will you be buying them all yourself, and/or are you still hunting for a “charity” to donate a portion of the proceeds to?

calling my accountant, frantically telling him to put all of my savings into melania trump nft collection only to be outbid by don jr and eric.