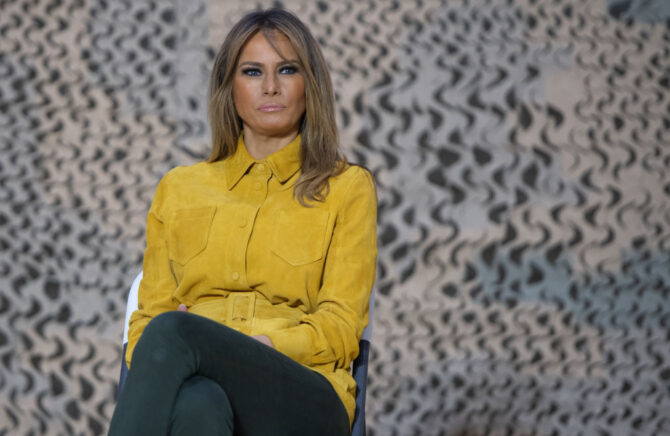 Melania Trump reportedly had to buy all new underwear after the FBI went through her closet during last month’s search of Mar-a-Lago, where agents recovered 33 boxes containing more than 100 highly classified documents stashed in the ex-president’s home office.

A “pal” of Melania’s recently told Radar: “Melania doesn’t like the idea of strangers going rifling through her things. Who knows who touched her underwear during the raid? She’s never going to feel comfortable wearing those ever again.”

The pal continued, “Most people don’t know that Melania is a bigger germaphobe than her husband. She hates people touching her and certainly doesn’t want to put on lingerie that FBI agents have had their hands all over.”

Of course, a really excellent way to avoid having your closet rifled through by federal agents is to avoid fraternizing–or, in Melania’s case, marrying–alleged criminals. But we digress.

Another source added: “This is her home. It’s her bedroom. Even her husband isn’t allowed in her bedroom. Even if they wore gloves, it is still strangers going through your underwear drawers. She has already bought new underwear and thrown everything that has been contaminated away.”

Last month, CNN reported the ex-FLOTUS told friends she “annoyed” by the search, though she opted not to release a statement on the matter and instead focus on her new NFT side hustle.

Her husband, however, wasted no time voicing his outrage over the matter, firing off an angry statement on Truth Social that read: “Just learned that agents went through the First Lady’s closets and rummaged through her clothing and personal items. Surprisingly, left area in a relative mess. Wow!”

Apparently since then, Melania has gone from feeling “annoyed” to “violated.” Unfortunately, she’s not getting much sympathy on Twitter. Here’s what folx are saying…

I think it's a good thing melania felt violated when the FBI searched her room because now she undestands how the Rose Garden felt.

Melania Trump has shared images of her body with the world.

We’ve all seen her naked.

Now we’re expected to believe she feels violated because the FBI saw her panties?

Melania said she felt violated by FBI agents "contaminating" her bedroom while they were at Mar-a-Lago.

Melania Trump, the only First Lady the entire world has seen naked, felt violated because the FBI searched her bedroom?

Melania Trump – who willingly shilled her husband’s bigoted birther claim, risking the safety of the Obama family & violating their sense of security – complained the FBI search made her feel violated.

Melania said she felt violated when the FBI raided her home…

Racist birther trash Melania was never a First Lady, she’s the 3rd wife of an adulterer who hates immigrant children, hates Christmas and hated the Rose Garden so much that she destroyed it. America was violated when she and her disgusting family entered the White House.

Donald Trump is single-handedly to blame for the FBI’s search of Melania and Barron Trump’s bedrooms.