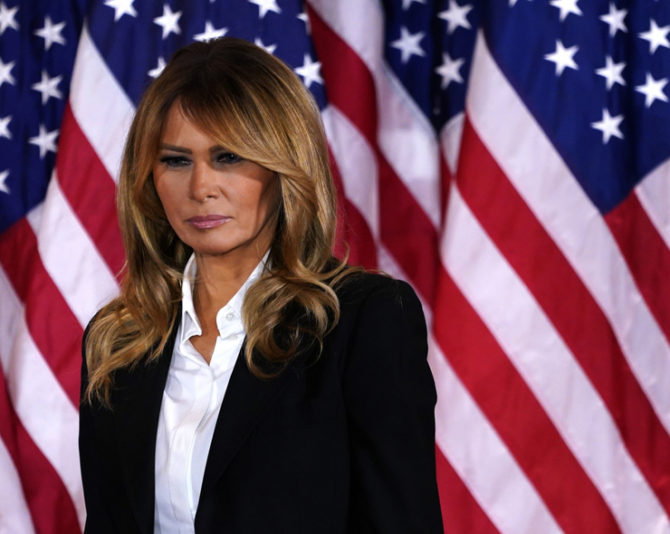 Melania’s got a new gig, guys.

This week, the Trumps launched a new website that allows anyone to invite them to special events and other public engagements. You can also request personalized messages from the couple, or simply extend your own thoughts and prayers.

The “About” section of 45office.com contains an 850-word synopsis of Trump’s time in office, highlighting his “greatest achievements” while making absolutely no mention of his countless scandals, corruption investigations, two impeachments, or the insurrection on the U.S. Capitol that bookended his presidency.

Meanwhile, over on the “Contact” page, people are given the option to send their thoughts to either Donald or Melania or both, as well as make a scheduling request or ask for a personalized greeting.

“Please allow up to 6 weeks for processing of your request,” the website reads. “Due to the volume of greeting requests President and Mrs. Trump receive, we will not provide status updates.”

If they handle requests anything like Trump handled building that stupid wall that never got built, people can probably expect to wait significantly longer than six weeks to hear back from the Florida couple.

In other Melania news, relationship expert and life coach John Kenny recently spoke with Express to try and decode her body language amid rumors she and Donald may be heading for divorce.

According to Kenny, Melania’s true feelings can be read “in her body language and behavior.”

“She may realize that she has chosen to be with someone that isn’t good for her, as her actions dictate, that even in public she finds it hard not to show her emotions,” he pontificates. “This comes out in her body language and behavior.”

Kenny also commented on a recent statement made by the former first lady’s office about the current state of her marriage, in which she accused the media of having an “unhealthy obsession” with her.

Mrs.Trump is no longer First Lady. She is a private citizen, mother, & wife. Sources in this article are not affiliated w her nor have insight into her thoughts or daily life. CNN’s FLOTUS Correspondent choosing to publish false gossip illustrates the media’s unhealthy obsession. https://t.co/Z61kDaESdY

“Her comment about an unhealthy obsession about her relationship is likely because of the emphasis she is placing on it herself,” he says. “She might be defending her relationship, as now he is no longer president it is ok for her to speak out.”

“But maybe she is struggling with people highlighting her real emotions. The truth can be hard to face, especially if you are being constantly reminded of it.”