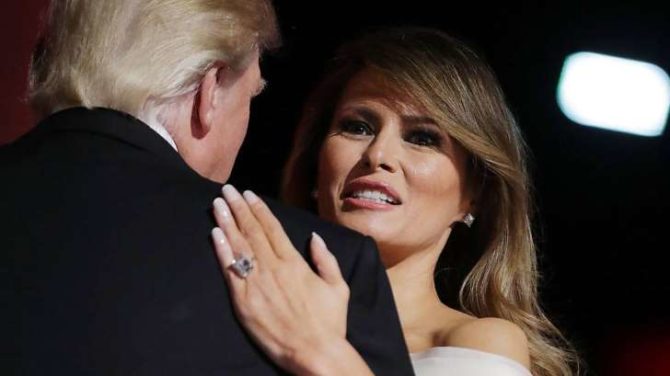 We totally called this.

Melania Trump is out. And not just as First Lady of the United States. She’s out of her 15-year marriage. At least, according to a former reality star/White House aide Omarosa Manigault Newman.

“Melania is counting every minute until he is out of office and she can divorce,” she told TV show host Lorraine Kelly over the weekend. “If Melania were to try to pull the ultimate humiliation and leave while he’s in office, he would find a way to punish her.”

Omarosa added that Melania, like 99.9% of the human population, is “repulsed” by her husband.

Related: Large moving truck spotted outside White House has many wondering if Melania is already moving out

Of course, who knows whether rumors are actually true? This is Omarosa Manigault Newman we’re talking about, after all. But the evidence is certainly compelling.

Melania purportedly burst into tears when her husband won the election in 2016, with one friend saying, “She never expected him to win.”

Then she waited almost six months before moving from Trump Tower into the White House. She claimed it was because the couple’s son Barron “needed to finish school,” but it was later reported she was renegotiating her pre-nup.

And she hasn’t exactly embraced her role as FLOTUS, other than to tear up Jackie O’s rose garden and complain privately about the “f*cking Christmas decorations.”

Here’s how Twitter is responding to the latest divorce rumors…

Do you think that Melania is going to write a tell-all book once their divorce is finalized?

melania leaving the wh*te house after leaving the divorce papers on the table pic.twitter.com/kpMvpo2hYQ

Yeah don't give Melania a redeeming arc after this. She's just as terrible, whether she divorces him or not.

Melania Trump moving out of the White House and heading to court to start with the divorce papers now that her contract is up. #BidenHarris2020 pic.twitter.com/1hSzrhcjJk

Rumors of a Melania divorce are floating around.

I believe them, it would make sense. It's not like she really has anything going for her anymore.

Melania realising she can now get the divorce #Election2020results pic.twitter.com/9Jt6wJAD8z

Apparently Melania is urging trump to accept the loss. Of course she is. She has a divorce to start and needs to get back on the market. Time is wasting.

Melania’s lawyer team getting the green light to file the divorce papers pic.twitter.com/4KkIopLSdA

Related: “Actual footage” of Melania fleeing the White House is blowing up on Twitter