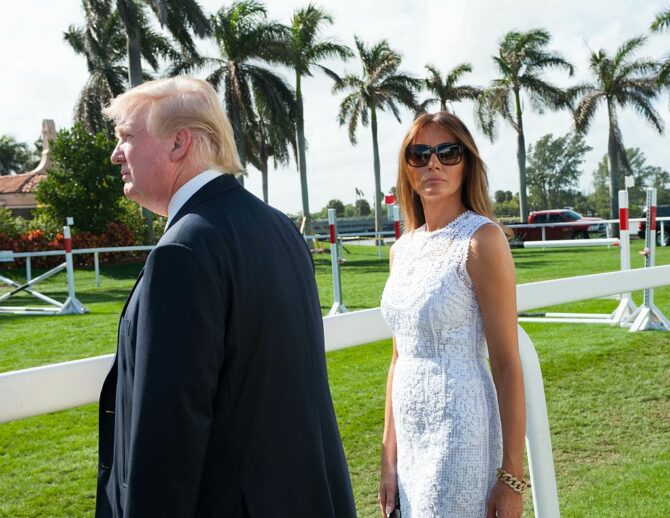 Melania Trump has always kept a low profile. But she’s been virtually invisible since leaving Washington, D.C. one year ago. Now, People reports that she and her husband, ex-president Donald Trump, are more or less strangers inhabiting the same golf resort in Florida.

According to magazine, the former first couple, who celebrated their 17th wedding anniversary over the weekend, have been spending less and less time with one another since last January.

They’re still living together at Mar-a-Lago, but they “mostly do their own thing,” a source tells People, adding that Melania is focused primarily on “her own interests away from the spotlight.”

Interests, it seems, that don’t involve her husband either.

While he spends his time golfing, she hangs out at the spa or concentrates on her “business and philanthropic interests,” like auctioning off the hat she wore when the French first family visited the White House in 2018.

One year after leaving D.C., their relationship is being described by the magazine as “livable” but they are clearly “different personalities at different stages of their lives.”

“She makes an appearance with Donald for certain dinners, but spends much of her time with her own family,” the source elaborates.

People adds that the ex-FLOTUS keeps “largely to herself in the seclusion of the private club” and that her “inner circle consists mainly of her sister and her parents.”

“She knows what Donald wants from her, but the rest of her life is dictated by her own interests,” a source explains. “Each has come to respect what the other wants and needs.”

Related: Melania is living with her “own family” and “not necessarily with Donald” according to new reports

This latest report about the alleged distance between the two spouses comes months after author Michael Wolff claimed in his book “Landslide: The Final Days of the Trump Presidency” that Melania didn’t actually live in the White House during her time as First Lady.

“For four years in the White House, it was never quite clear how much time she was spending at the White House or in a house in Maryland where she had settled her parents,” Wolff wrote. “Aides were careful not to closely inquire or openly wonder.”

Though it was never actually confirmed, rumors that Melania was residing with her parents in Potomac, Maryland swirled throughout her husband’s failed one-term presidency.