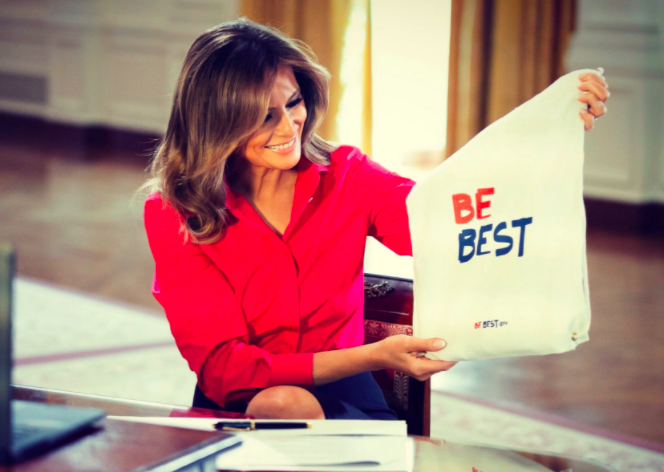 Melania Trump reportedly wants to continue the #BeBest initiative she launched as FLOTUS, so she’s opening an office at Mar-a-Lago to carry on with her anti-bullying pet project.

Two sources close familiar with the plans tell CNN that Melania’s new Mar-a-Lago office will be staffed by three former White House staff members: Hayley D’Antuono, who served as the former first lady’s director of operations and trip supervisor; Marcia Kelly, who was an unpaid senior adviser; and Mary “Casey” Finzer, who worked as a low-level East Wing staff assistant in charge of gift wrapping and keeping inventory on Melania’s “gift closet.”

Her intention is to “maintain ‘Be Best,’ ” said one of the sources, Trump’s loosely defined initiative that looks to help children. During her time in the White House, “Be Best” existed as a broad, three-pillared initiative, consisting of children’s health and well-being, safety online and prevention of social media bullying and the impact of the opioid crisis on children.

Trump often did little to help clarify or expand on her platform during her time in the White House, often going weeks between Be Best-focused public events. The East Wing policy office was not robustly staffed, at times sat vacant, and at most had one full-time, dedicated East Wing employee.

Of course, the question almost everyone has about the whole thing is “WHY???” Seriously, why?

The #BeBest initiative was just an empty platform Melania created at First Lady because, like those f*cking Christmas decorations, she had to do it. It accomplished nothing in four years and had no meaningful impact in the world.

On top of that, Melania isn’t exactly beloved. She left the White House with the lowest favorability rating of any First Lady in modern history, with 47% of people saying they disliked her.

CNN adds that Melania’s #BeBest office is currently being run out of Mar-a-Lago but that she is looking at office space elsewhere in Palm Beach.