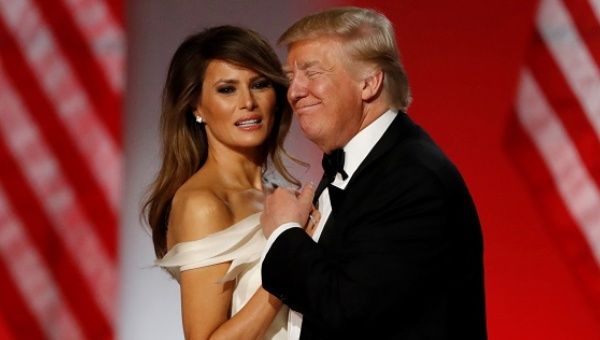 Donald Trump isn’t the only one who hates his new job. His wife, Melania, is equally as unhappy, Us Weekly reports.

When Melania left the tiny town of Sevnica, Slovenia and ultimately came to America way back in 1996, she had a single goal in mind: to launch a career in fashion. Never did she think that, 21 years later, she would be the First Lady of the United States of America.

Related: What Donald Trump Jr. gave his wife on Valentine’s Day is more hideous than VD

“Melania is unhappy with how her life ended up,” a source close to the First Lady tells Us. “She is miserable.”

According to the people closest to FLOTUS, her life has been completely turned upside down, and not in a good way, since having the #PowerOfTheFirstLady bestowed upon her. And instead of embracing her new role, it’s turning her into a depressed recluse.

“This life wasn’t her dream. It was Donald’s,” stylist Phillip Bloch, a friend of the Trump’s, tells Us.“Truthfully, it’s a lot to cope with.”

Melania is allegedly “horrified” by all the people who have been making fun of her, another source says. Not only that, but all the high profile fashion designers who are now refusing to dress her has been a bitter pill to swallow.

“That entire world she used to enjoy,” a source says, “is closed to her.”

According to Us, Melania spends most days hidden away in her lavish $100 million New York apartment, likely with the shades tightly drawn, trying to ignore the constant stream of picketers outside the building’s entrance. Though she has always been a very private person, Bloch says, “she is staying hidden more.”

Related: Melania Trump publicly thanks D-list actress on Twitter for coming to her defense

For example, before the inauguration, Melania would accompany her 10-year-old son, Barron, to and from school every day in a chauffeured luxury SUV. These days, she remains at home and instead “has the Secret Service take Barron to school and retrieve him.”

In fact, Melania has only left her apartment a small handful of times in the past month, including to attend the inauguration on January 21, running errands on January 30, and joining Donald at Mar-a-Lago the weekend of February 3, where she was photographed strolling around the Morikami Museum and Japanese Gardens with the Prime Minister of Japan’s wife.

“Don’t let her smile in those photos fool you,” claims the source. “She hates this.”

The feeling is mutual, FLOTUS.