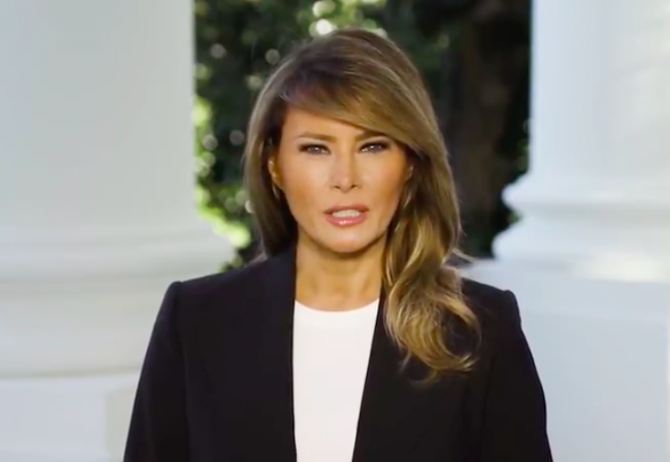 First Lady Melania Trump will give a speech during tonight’s Republican National Convention and she wants everyone to know it will not be plagiarized this time.

As you may recall, Mrs. Trump lifted, word-for-word, several lines from the speech Mrs. Obama delivered at the Democratic National Convention in 2008. And she may have gotten away with it, too, if it weren’t for, you know, people’s memories.

Melania was dragged in the press and on Twitter for plagiarizing the speech. Trump staff writer Meredith McIver later accepted blame for the incident, saying she felt “terrible” and that she never meant to cause any harm. Melania herself never apologized.

Well, this year, Melania says “every word” of her speech will be her own.

Speaking to reporters, Stephanie Grisham, the first lady’s spokesperson, assured people that Melania is not a copycat.

“I think that it’s been very, very clear that over the last three and a half years, Mrs. Trump has done nothing but learn and grow in this role and she’s been doing a fantastic job at that,” Grisham said.

“We have been working really hard the last three weeks. I can tell you that every word in the speech is from her. It’s very authentic and it’s going to come from the heart.”

Mrs. Trump’s address will be delivered from the recently-renovated White House Rose Garden before what the Trump campaign says will be a “small audience.”

Melania Trump has 'renovated' the Rose Garden in the White House (photo on the left) that was originally designed by Jackie Kennedy as a tribute to her husband John (photo on the right). Melania killed it- literally. Stone cold heart. #MelaniaRuinsEverything @FLOTUS pic.twitter.com/tYYj1xjSUn

Grisham went on to say Melania’s speech will be one of her longest addresses ever, and that it will be “positive and uplifting,” much like her failed #BeBest anti-bullying initiative.

“I would say it’s very forward-looking,” Grisham said. “She definitely lays out some of the things she wants to do with Be Best in the next four years.”

If it’s anything like the last four years, it shouldn’t be much.