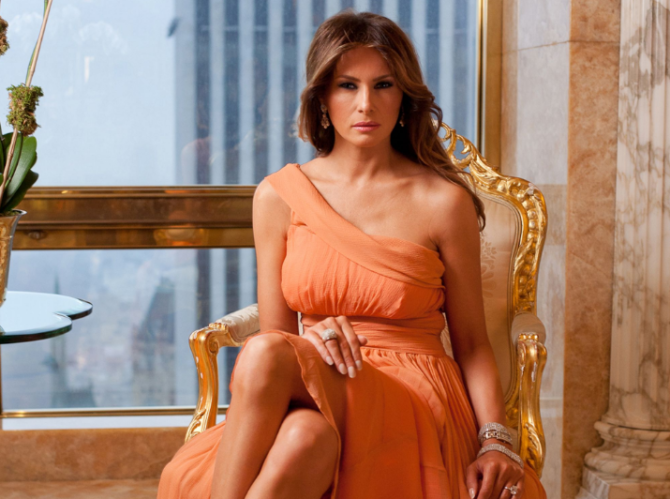 Melania Trump has a message for her subjects, however big or small, who stand up for her: She sees you. She appreciates you. She applauds you.

Model and actress Emily Ratajkowski, whose credits include TV shows like iCarly and Maroon 5’s 2013 music video “Love Somebody,” took to Twitter yesterday morning to call out a New York Times reporter who she claims called Melania Trump a hooker:

Sat next to a journalist from the NYT last night who told me "Melania is a hooker." Whatever your politics it's crucial to call this out for

what it is: slut shaming. I don't care about her nudes or sexual history and no one should.

We totally agree with Ratajkowski’s sentiment, but perhaps instead of tweeting about it she should have confronted the reporter directly? Generally speaking, that’s more effective way of reaching a person.

Related: Melania Trump has no plans to live in the White House, but she’s still going to redecorate it

Nevertheless, Melania Trump was very impressed. The First Lady took notice of Ratajkowski’s bold behavior and, from her throne atop Trump Tower, used her official FLOTUS Twitter account to commend her for her bravery:

Applause to all women around the world who speak up, stand up and support other women! @emrata #PowerOfEveryWoman #PowerOfTheFirstLady

Unless, of course, they are “nasty women” marching in the streets, women running against her husband, women accusing her husband of sexual assault, female reporters, or Rosie O’Donnell.

The tweet was Melania’s first since Saturday and only her fifth since her official FLOTUS account was created nearly a month ago.

Related: Donald Trump Is Only Interested In Grabbing Women, Insists He’s Never Had A Gay Thought In His Life

The New York Times responded by calling the reporter’s comment “inappropriate” and said editors have spoken with the reporter, who has not been identified, about it.

“At a party last night, a Times reporter who does not cover Washington or politics referred to an unfounded rumor regarding Melania Trump,” The Times said. “The comment was not intended to be public, but it was nonetheless completely inappropriate and should not have occurred. Editors have talked to the reporter in question about the lapse.”