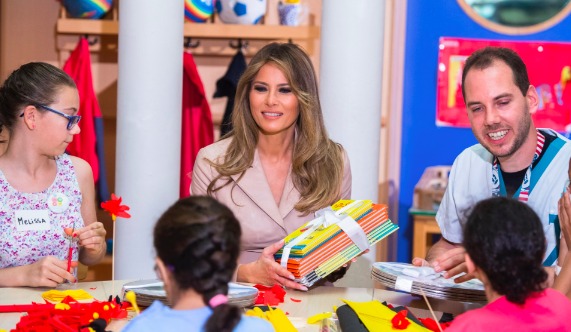 Summer is winding down and kids are heading back to school and First Lady Melania Trump decided to mark the occasion in true Trump fashion… with a tweet.

It’s #Backtoschool for many youth this month. As you begin a new year, how will you be the best you? #BeBest

#BeBest is Melania’s online cyber bullying/child well-being/opioid epidemic initiative, not to be confused with Michelle Obama’s 2016 #BeBetter campaign. She launched the initiative earlier this year, nearly a year and a half after becoming First Lady.

Have you asked your husband @POTUS this question?

Not reading your husband's tweets would be best.

Well I won’t be committing treason, putting kids in concentration camps, or ripping off the American people for millions of dollars.

By campaigning, advocating and working like hell to get you and all of your terrible friends and family out of office and, where possible, into prison! ??? #BeBest

Will you be letting them out of cages for school or do they have to stay in them?

By growing up to be self reliant so as not to rely on Sugar Daddys or have to work as high end ESCORTS whilst lying that we are models on our immigration applications!

I will get as many 18 year olds registered to vote so that in 2020 we restore democracy.

Related: Melania Trump pretended to garden and the internet can’t even