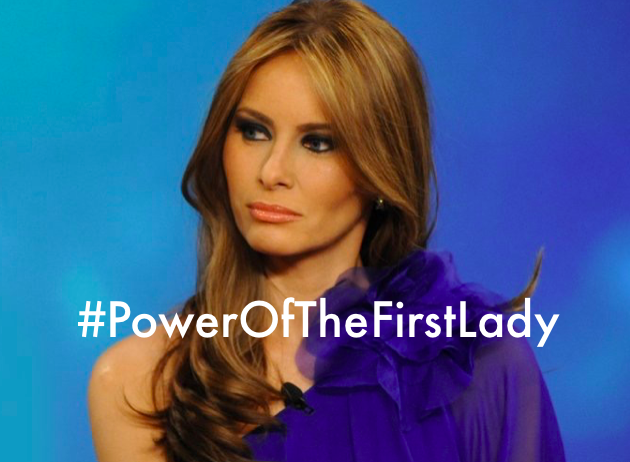 Melania Trump is slowly but surely settling into her role as First Lady and focusing on her official FLOTUS platform: Online bullying. Specifically, challenging online bullies who attack her and her family.

This week, Melania tweeted to D-list actress Emily Ratajkowski, thanking her for coming to the her defense when Emily overheard someone calling Melania a hooker at a dinner party:

Applause to all women around the world who speak up, stand up and support other women! @emrata #PowerOfEveryWoman #PowerOfTheFirstLady

Melania has also created her very own hashtag, #PowerOfTheFirstLady, which she attaches to her tweets. Naturally, it didn’t take people, er, “online bullies” long to hijack the hashtag and claim it as their own. We’re sure it’s only a matter of time before Mrs. Trump trademarks it and then sues them all for using it.

Check out our favorite #PowerOfTheFirstLady tweets (so far)…

Yes, you have the power to piss away our tax dollars to the tune of $1M Per day. #Powerofthefirstlady

Is it me or is Melania Trump's #PowerOfTheFirstLady thing kind of weird?

Is limiting social media embarrassments by a puerile 70 year old a #Powerofthefirstlady? https://t.co/qR1klaa5OK

Honestly, what does #Powerofthefirstlady even mean? ?????

@FLOTUS If the #powerofthefirstlady is so great, you should use it to speak up for the countless victims of your racist & sexist husband.

#PowerOfTheFirstLady How is this even trending??? All she does is license her name ?

Is anybody else reminded of the Power Rangers whenever Melania uses the hilarious #PowerofTheFirstLady hashtag? pic.twitter.com/L86f1uA9iD

@FLOTUS #PoweroftheFirstLady , what is that worth in Rubles?

@FLOTUS #PowerOfTheFirstLady to use position to make $$$ out of gullible Americans?

Related: Trump wonders where leaks are coming from as he conducts official state business in full public view