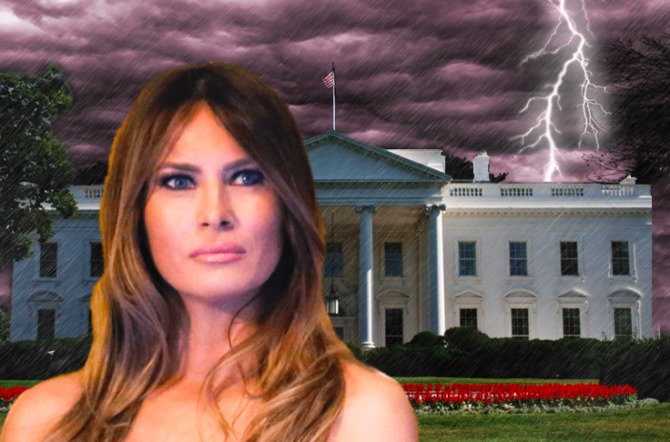 “Exciting to break ground on the new tennis pavilion project at the White House today,” FLOTUS tweeted yesterday. “Thank you to all who will help in making this legacy piece possible.”

A tennis court pavilion? That’s definitely something ordinary Americans can relate to!

She continued: “This structure will be a testament to American craftsmanship and skill.”

I am pleased to announce the ground breaking of a new tennis pavilion on the White House grounds. This structure will be a testament to American craftsmanship and skill. pic.twitter.com/6sY3anuOk2

Mrs. Trump said it is her hope that the tennis court pavilion will function as a “private space” for future First Families, offering them their own personal “place of leisure and a gathering place.”

Evidently, the six story, 132-room, 55,000-square-foot White House doesn’t offer enough “private spaces” for her to hide from her husband.

“Thank you to the many talented people involved for their dedication and support,” she added.

Along with the tweets, Mrs. Trump posted a picture of herself wearing a designer coat and heels and holding a gold shovel in front of the tennis court. Again, totally relatable!

Exciting to break ground on the new tennis pavilion project at the White House today. Thank you to all who will help in making this legacy piece possible for future first families to gather at and enjoy for years to come. @theNationalMall @NatlParkService pic.twitter.com/UcYLeJ27Ni

Just for some context, Michelle Obama’s White House legacy project was installing a vegetable garden, which she used to teach Americans about healthy eating habits and how to source their own food.

Hillary Clinton‘s White House legacy project was curating a sculpture garden, which promoted contemporary works of American art, as well as overseeing a rotating display of works by contemporary American artists inside the White House state rooms for visitors to appreciate.

And Melania Trump… is having someone build her a tennis court pavilion for her own personal enjoyment. #BeBest!

Melania digging a hole on the far end of the “tennis pavilion project.” “I am just checking on tennis court, Donald,” she says as she plots her underground escape tunnel. https://t.co/DzqzcaxFIf

Yes everyone digs with their shovel in stilettos…🙄

Sis. READ THE ROOM FOR CRYING OUT LOUD.

You really don’t have any idea how utterly obnoxious your tweets are while your husband massacres r allies, appeases r enemies, bullies Americans, incites violence, tortures children & destroys democracy, do you? I can’t even imagine what it would be like to be so vapid & stupid.

FINALLY a legacy the entire country can relate to and celebrate… Just kidding. https://t.co/39kf8dx3oA

The WH does not need a tennis court. It needs an exterminator !

“I, Donald J. Trump, am so good at tennis! People are saying I’m even better than Roger Fedrer and Raphielle Nadall! So true folks, so true, believe me!” pic.twitter.com/MQCSn5lr6S

How much did that cost me birther lady?

The Kurds are about to be massacred because her husband is incompetent. But hey, tennis anyone? https://t.co/bLhO6oijIi