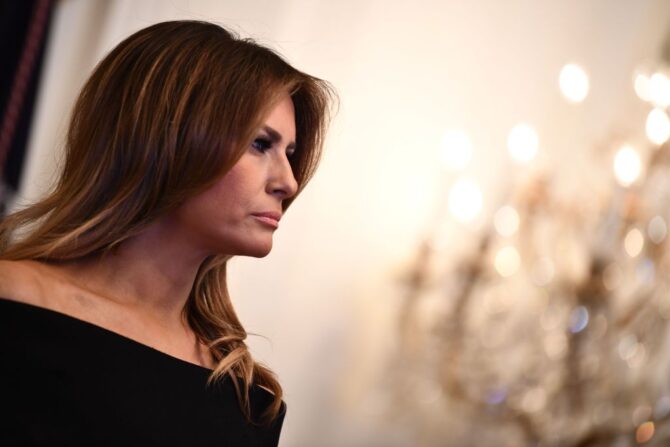 The agents searched Trump’s Palm Beach, Florida home as part of an ongoing investigation into alleged mishandling of presidential records, including classified documents.

The ex-president was in Manhattan preparing to give deposition in New York Attorney General Letitia James’ civil investigation into his shady business dealings when roughly three dozen FBI personnel conducted the surprise search, which lasted for about 10 hours.

Agents seized boxes and documents, but no electronics. Now, it’s being reporting they also scoured Melania Trump’s closets and drawers.

This is the second time in less than a week the ex-FLOTUS’s wardrobe has made national headlines.

Last week, USA Today revealed that Trump’s Save America PAC shoveled out tens of thousands of dollars to pay for a “fashion consultant” for his wife with money that was supposed to go toward his frivolous legal fight over the 2020 election results.

Fashion professional Hervé Pierre Braillard received four payments, totaling roughly $60,000, for what was described as “strategy consulting” without any further explanation as to what that means.

In January of this year, Melania unsuccessfully tried to auction off a hat she wore during an official White House state visit in 2018.

When she first announced the auction, she said she would only accept payment via SOL, a cryptocurrency on the Solana platform. At the time, the value of a SOL was roughly $170. But by the time the auction ended, the crypto market had crashed and value of the coin had dropped to under $100.

In the end, Melania’s hat received just five bids and sold for $170,000, $80,000 less than she initially wanted for it, and it was reportedly purchased by, wait for it, Donald Trump.

Naturally, the MAGA cult is pissed that the FBI rifled through Melania’s closet, so they’re resorting to casual homophobia on Twitter to talk about it. Here’s some of what they’ve been saying…

Ok what was the FBI looking for in Melania Trump's wardrobe, outfits for Drag Queen Night?

Why did the FBI raid Melania's closet? Are they trying to get fashion tips for taco Jill?

What possible 'documents' could those pervert FBI agents possibly be looking for in Melania's underwear drawer? ???? Disgusting.

Melania hasn’t commented on Monday’s raid, but her husband is now spinning a wild new conspiracy theory suggesting the FBI “planted” evidence in his home.

“The FBI and others from the Federal Government would not let anyone, including my lawyers, be anywhere near the areas that were rummaged and otherwise looked at during the raid on Mar-a-Lago,” Trump wrote on Truth Social earlier today.

“Everyone was asked to leave the premises, they wanted to be left alone, without any witnesses to see what they were doing, taking or, hopefully not, ‘planting.’ Why did they STRONGLY insist on having nobody watching them, everybody out? Obama and Clinton were never ‘raided,’ despite big disputes!”