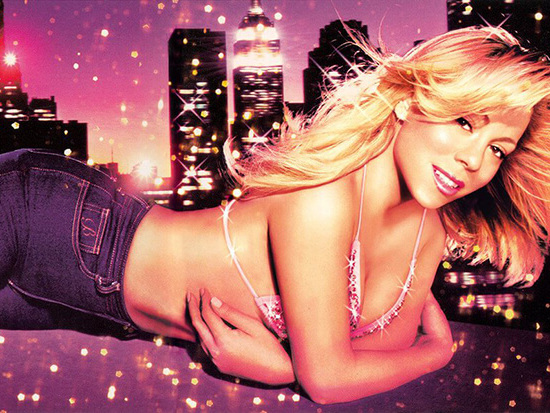 The year was 2001 and it seemed like Mariah Carey’s career was dead.

Her feature film debut Glitter was a box office bomb, plagued by multiple delays, terrible reviews, and a bad script. Some truly bizarre promotional appearances, a public meltdown, a brief hospital stay, and, oh yeah, the fact that the movie was released on September 11th, also didn’t help matters.

Because of all this, the film’s accompanying soundtrack, which featured 12 ’80s-inspired disco/R&B/hip hop tracks also tanked, becoming Carey’s lowest-selling album of her career and resulting in her being dropped from her $100 million record deal.

Glitter is back on the charts–peaking at #1 in many countries–thanks to die-hard Mariah fans promoting the hell out of it on social media in the lead-up to her latest album, Caution, which is out today.

The hashtag #JusticeForGlitter has been trending all week. Here’s what people have been saying on Twitter:

They can’t even call her “flop” album a “flop” anymore when it has literally managed to become the top downloaded album in the US, even if it’s short lived. 17 years after its release and she’s alive to experience this. #JusticeForGlitter?

The fact that @MariahCarey “Glitter” is on the top 10 on iTunes soundtrack and unavailable to even stream is iconic. 17. Years. Later.

This beautiful, impossible song is currently in an album that’s #3 on iTunes.

Mariah was overworked by her label during the time of this song, to the point of entering rehab.

Show her that her hard work didn’t go to waste and download Glitter on iTunes.#JusticeforGlitter ? pic.twitter.com/URdN7yQknL

The critics in 2001 tried it, but the album’s production is RICH, and very ahead of its time. Mariah Carey served us a throwback before it was trendy and cool to do so. #justiceforGlitter pic.twitter.com/AjdSsLiG5O

Imagine not awarding Glitter any Oscars when it contained scenes like this ??Justice for @MariahCarey #JusticeForGlitter #Glitter pic.twitter.com/WcVb1xhPGk

#Glitter by Mariah Carey is now the #1 album on US iTunes 17 years after its release. The same album that was once said to have “destroyed her career” is now the best selling album on iTunes. Mariah’s power remains unmatched. Lambs, we really got #JusticeForGlitter pic.twitter.com/14QxfFCATO

.@MariahCarey's 'Glitter' has reached #1 on US iTunes (albums).

Fucking legend ! True longevity!! Reclaiming the top spot after almost 2 decades without passing. Who else does that ?! #legend #mariahcarey #skinnylegend #justiceforglitter #lambily #glitter

A post shared by MariahCanSingCarey (@mariahcansingcarey) on Nov 14, 2018 at 6:09pm PST

Even Mariah herself, who once famously banned the word “glitter” from being said in her presence, has gotten into it, tweeting yesterday:

I have to dedicate today's #tbt to Glitter, which is currently #1 on the iTunes albums chart, 17 years after its release and on the eve of my new album release! My fans are THE BEST ??? #JusticeForGlitter!! LET'S GO #CAUTION?? pic.twitter.com/i2v8Zkp1oy

Justice has been served.