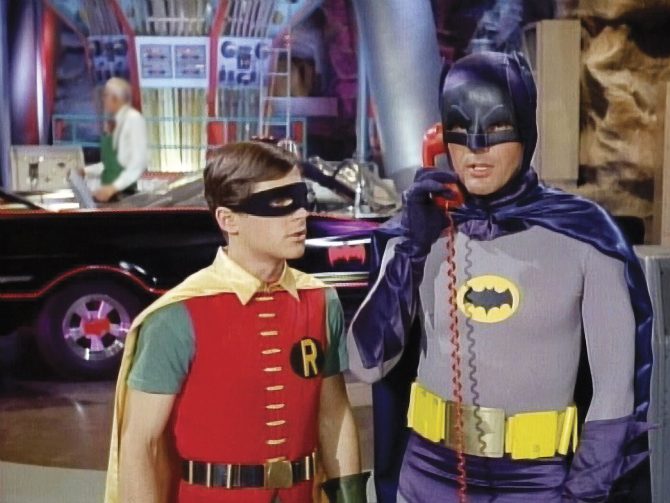 Are they or aren’t they? Bat-fans have asked that question for more than 50 candy-colored, ultra-mod years. The camp and homoeroticism of Batman has earned a reputation that the character and his subsequent movie versions have tried so hard to get over. Yet, even now, when we look at the iconic 1960s TV series, we’re not sure.

Batman of course became a sensation when it debuted back in 1966, only to meet an ignoble cancellation a few years later. At its peak though, the Adam West-Burt Ward action series attracted some of the biggest names in showbiz, all eager to get in on the comedy and don a ridiculous villain costume. It should come as no surprise that some of the biggest closet cases of the time also showed up to get in on the fun, including Cesar Romero (as the manic Joker), Vincent Price, Liberace, Victor Buono, Roddy McDowell, Tallulah Bankhead and Lesley Gore. Ditto to a litany of gay icons who amplify the camp factor, such as Eartha Kitt & Julie Newmar (both as Catwoman), Ethel Merman, Shelley Winters and Joan Collins. Oh, and the men love wearing tights. Just saying.

Batman may well have been the RuPaul’s Drag Race of its day: trendy, star-studded, ridiculous and unapologetically campy. We recommend it this weekend as a colorful and goofy binge perfect for a holiday reprieve.

PS: They totally are.