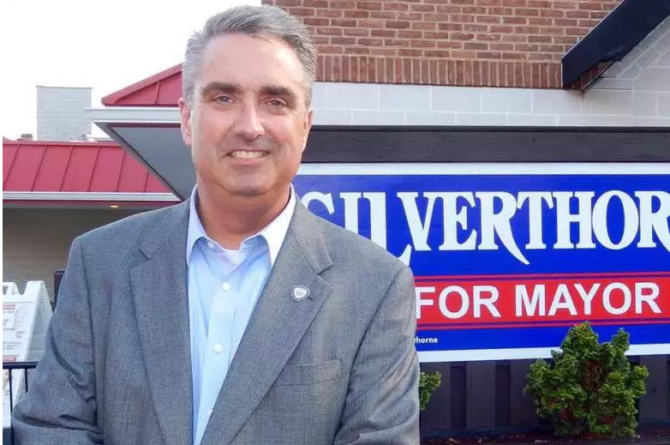 50-year-old Silverthorne’s legal troubles began last summer when he was arrested and charged for felony distribution of meth, as well as misdemeanor possession of drug paraphernalia, following a sting operation in a hotel parking lot.

According to police, after receiving an anonymous tip, detectives connected with Silverthorne through the gay dating website Bare Back Real Time last July. During their exchanges, the mayor promised “a group sexual encounter” with the men in exchange for hard drugs.

Two undercover officers met Silverthorne in a Crowne Plaza Hotel parking lot last August. After Silverthorne accepted about two grams of meth valued at $200, the cops whipped out their badges and arrested him. As a result, he was forced to resign as mayor and he had to give up his job as a substitute teacher.

According to the Washington Post, now that he’s pled guilty, Silverthorne faces up to 40 years in prison; however, because he is a first-time offender with a long record of public service, but his lawyers believe his sentence will likely be less than two years.

“The facts were such that it would have been futile to go to trial,” Silverthorne’s attorney, Brian Drummond, said after the hearing. “The statute for distribution in Virginia is very broad, and he is at the lower end of the spectrum. He is guilty of the transaction, but he didn’t get any money for it.”

This is likely a “you get the hotel room, I’ll bring the stuff” situation, which many feel is a gross overreach of the justice system.

The judge ordered Silverthorne to be held in custody until his sentencing on June 9.

Related: Let’s take a peek back at this year’s weirdest political sex scandals