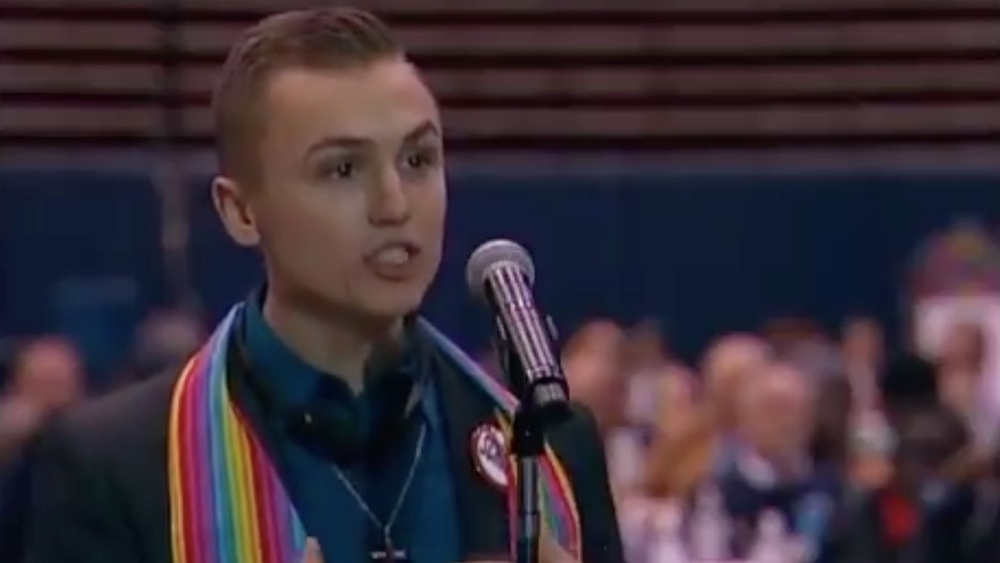 In a 438 to 384 vote at the church’s General Conference in St. Louis, Missouri, church leaders passed “the Traditional Plan” which maintains the church’s policies forbidding clergy from ordaining same-sex unions and serving as openly LGBTQ.

Alternatively, leaders could’ve voted in support of the “One Church Plan” which would’ve allowed both, but a majority chose the status quo.

An official statement from Methodist Bishop Scott Jones said, “Our views on same-sex marriage have not changed. We will continue to welcome lesbian, gay, bisexual, transgendered and queer persons to our churches and affirm their sacred worth.”
Yeah, thanks, Bishop.
Related: Methodist Pastor Single-Handedly Saves Church. Oh, He’s Gay? He’s Fired!

According to CNN, “The United Methodists’ Book of Discipline states that all people are of ‘sacred worth’ but denounces the ‘practice of homosexuality” as “incompatible with Christian teaching.’ Openly gay and lesbian clergy members can be removed from ministry, but church trials on the matter are rare” even when clergy come out or ordain same-sex unions.

Nancy Denardo, a lay delegate from western Pennsylvania, spoke against the One Church Plan at the conference, stating, “The One Church Plan does not agree with the words of our savior. [It] deceives young persons into believing that same-gender marriage is OK with God — when clearly it is not. The word became flesh — not the flesh becomes the word. I’m truly sorry if the truth of the Gospel hurts anyone.”

Clergy member Cara Nicklas from Oklahoma also spoke against the One Church Plan:

“By those advocating for the One Church Plan, I was either told explicitly that I am mean-spirited and unloving for holding to the church’s doctrine on same-sex relationships…. I don’t love all, I am told…. When gay persons become convinced I don’t love them because I don’t condone their behavior, it hurts my relationships with them. You surely don’t want to be united with me, if I am as mean and unloving as I am accused. If the One Church Plan passes, I’m certain you will not stop trying to make me fit your idea of a loving person.”

Jeffrey Warren, a gay delegate from New York, emerged as a passionate voice for equality. In the video below, he discusses how he wants the church to tell LGBTQ people that God loves them. He then shouts about how he’d like to see the church united in love rather then denying gay people like himself.

For anyone who missed it. #GC2019 pic.twitter.com/2aHcw0CLL4

The LGBTQ Methodist advocacy group RM Network has pledged to continue to push for inclusion in the Methodist denomination. Observers have long thought that internal disagreements about same-sex marriage and LGBTQ clergy would lead to a schism, but it hasn’t happened yet.

Over 80 million people around the world identify as Methodist.

We will gather soon to determine the next steps in our continued advocacy for LGBTQIA+ people in The UMC. There may be a “traditional” (divisive) plan, but by no means is our work abandoned. This is our Church. This is our Christ. This is our God.