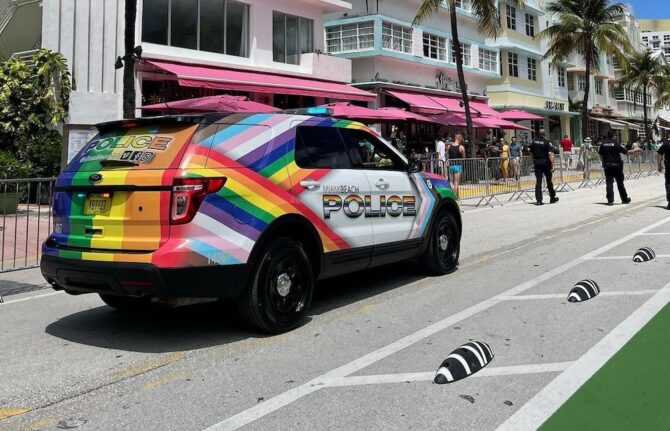 The police department in Miami Beach, Florida, covered one of its cars in stripes from the LGBTQ Progress flag and rolled it through the Miami Beach Pride Parade last month, as the department’s Instagram account proudly proclaimed at the time.

Comments on that Instagram post reeked of homophobia, as you might expect, with people saying the Pride-themed police car was “too much” or “a waste of taxpayers’ money.” (Someone else called for a “straight people parade,” as if that’s not every other day of the year.)

But on Reddit’s r/lgbt forum, a photo of the car sparked a different backlash, considering the “Don’t Say Gay” law Florida just passed.

“Surprised this is allowed in Florida,” one commenter said of the MBPD’s rainbow-hued police car.

“Feels extra performative because of that,” another person replied. “Actions speak multitudes louder [than] the pride flags.”

A third person wrote, “Short-circuit the state’s legislature when you call in a ‘don’t say gay’ alert on the police.”

Other people, meanwhile, noted the torturous history of LGBTQ populations’ interactions with law enforcement. “The first Pride was an anti-cop riot,” one commenter wrote.

“Came to say this exactly,” another person said. “The police have never been on our side. This is empty performative gesturing.”

“And cops will be the ones to act if/when more anti-LGBT legislation is enacted at the rate it’s going,” a third person chimed in. “Cops are not our friends. Rainbow patrol cars while arresting gender-affirming parents for child abuse.”

Another Reddit user cited the “consistent statistics of U.S. police violence and sexual abuse against trans people,” while someone else said the sheriff of their hometown made a public statement “that if he ever saw a trans person in a bathroom, he’d ‘beat them so bad their mother wouldn’t recognize them in the hospital.’”

A friend of mine took a picture of it while on her honeymoon. What do you think? from lgbt

And someone else speculated that the department might be using the car as “a joke, a hazing device, and an informal disciplinary tool.”

“I hope I’m wrong,” that Reddit user added, “but I’ve known too many officers to not have this bias.”