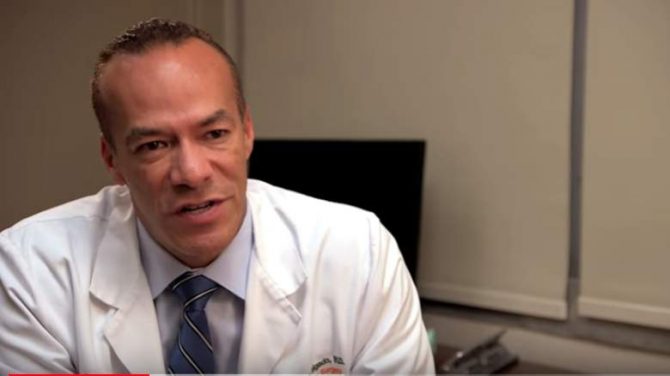 A Florida surgeon is out of a job after posting images of his patients’ genitals on Instagram.

Christopher Salgado worked as a genital reconstruction surgeon at the University of Miami. He received his walking papers this week after complains from his patients that he had posted images taken during surgical procedures without their permission to his Instagram account. Last month, Salgado began sharing said images within a Facebook group to try and attract new business.

Instead, he horrified patient and non-patient alike.

On Valentine’s day, Salgado posted a picture of a dissected penis in the shape of a heart, along with the caption “there are many ways to show your LOVE.”

In December 2018, he showed an image of a transgender man with his scrotum cut open and his testicle implants on display. Salgado also posted a video of a penis enlargement surgery, video of a vaginoplasty and a CT scan showing a sex toy that had to be surgically removed.

He often captioned these photos with mocking remarks. In the case of the aforementioned CT scan, he quipped “mishap… could have been avoided.” When he posted an image of a penis dissection, he added “#asiancock.”

"Dr Christopher Salgado and the University of Miami Hospital leads the way in gender affirmation. #UMH" via… https://t.co/esDeI8A6Oj

The board of the University of Miami fired Salgado on Tuesday and has quickly tried to distance itself from the disgraced surgeon. A petition has also been sent to the Board of Surgeons in hopes Salgado will lose his license.

The accompanying letter read in part: “transgender patients are an incredibly vulnerable population as it relates to seeking medical care. We experience violence, neglect, misgendering, sexual assault, and more. To see a surgeon who claims to specialize in treating transgender patients using racist, homophobic, and transphobic hashtags like “Asian dick,” “get that money,” “what the f*ck is that” among many, many other horrifically inappropriate comments is beyond unacceptable.”

Since the controversy over the Instagram account began, reports have also begun to emerge that he sexually harassed patients, and of a high number of patients say they experienced complications from his surgeries.

Salgado once appeared on the TLC series I am Jazz about transgender teenager Jazz Jennings.