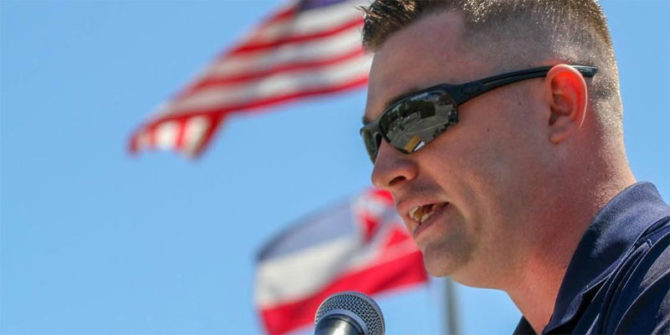 Coming out: Aycox came out to family in his native Mississippi at age 20. It was primarily his set of friends who knew when he wed his boyfriend Mario, an Latino Florida Air National Guardsman, in 2013. But following his medical discharge from the Navy, Aycox decided to make a run for Congress as a Democrat. He and Mario moved back to Mississippi from Florida to set up a new life with new political aspirations.

Hearing whispers about his sexuality, Aycox decided came out publicly in May 2018, making him the first ever openly gay Congressional candidate from Mississippi. That’s right, Mississippi, one of the most right-wing states in the nation.

If you are in MS04 this is your next congressman! Jeramy is an incredible ally to the LGBT community! Show your support in November for your next representative!

Making a Difference: “Until the campaign, I never really ‘came out.’ I didn’t,” Aycox told the Jackson, Miss., Clarion Ledger during the campaign. “This is me. It’s not who I am, it doesn’t define me, it’s just a part of me. It’s like having brown hair, it doesn’t change who I am … I didn’t do this to be the voice of the LGBT community. I did this for change. I did this to make a difference.”

Aycox knew opening up about his sexuality could cost him his shot at a seat in the legislature. Needless to say, many areas of the United States still harbor open hostility to LGBTQ people.

Related: Out candidate Michael Aycox on his historic campaign and that time his dad downloaded Grindr

Fear for his political future did not deter him. Aycox found it particularly vital to speak about his sexuality and marriage because his primary challenger Michael Evans opposed marriage equality. Even worse, Mississippi passed HB 1523 in 2016, a law that allows businesses to discriminate against gay people on the basis of religious freedom. Following his defeat in the Democratic primaries in June 2018 to state representative Michael Evans, Aycox went on to found One Mississippi, an organization that lobbies for equality in a state devoid of anti-discrimination protections. Now a recognized name in politics, he hasn’t ruled out other runs for Congress in 2020.

Great evening at the HRC National Gala. I was honored to have shared this experience with some incredible people. @j.d._mccullough your sassy ass is always appreciated, missed, and loved. @kalilnegron great finally meeting you and hanging. @tyleriangriffing I know this experience is one that will transcend life barriers and continue to be an amazing moment where we have hope. Lastly @jbreast words will never be able to describe the impact you have had on the world. It is because of you many have found courage. It is because of you many of us found strength and it is because of you many of us braved the closeted lives we lived and found acceptance. Thank you! You have truly changed lives.#equality #lovewins #lovenothate #ameriqueer @ameriqueer

At the start of my campaign I lived under the belief that ‘I am gay, so what.’ I stand by the fact that identifying as LGBTQ is like my hair color; it is a part of who I am, but does not define me. As the campaign progressed and the stories of my sexuality continued to surface, I realized that my “coming out” was bigger than I could imagine; I was a first. Daily we were receiving emails and messages of individuals telling their stories. Daily we were being approached, with tears in their eyes and a secret in their heart, telling us our courage gave them hope. I realized that coming out was bigger than the Mississippi 3rd Congressional Race, it was bigger than my personal privacy, it was bigger than me; my coming out was about the many closeted and fearful people across this state and nation struggling with their identity.”

After realizing the gravity of my campaign and the impact we were making I knew we didn’t have a choice. After the story broke we received both positive and negative reviews. From love and tears to death threats our team stood firm on our beliefs, platforms and pressed on. Coming out is one of the single hardest things a person can do. Although the self-admittance that “I am gay” may be easily portrayed in cinema, it can be detrimental to relationships, social status, and personal convictions. Even though there is a risk associated with coming out, the pros most assuredly outweigh the cons. Coming out gives the individual an identity, a community, and a feeling of normalcy. Coming out opens the door for an individual to be at peace with themselves and not hide in the shadows. Although rejection in some form is inevitable; being free, open, and honest with oneself allows for an individual to learn their pride. Pride in their beliefs, their struggles, and their community. Coming out is empowerment for members of the LGBT+ community and that is how it affects significant positive change for not only themselves but also the world!