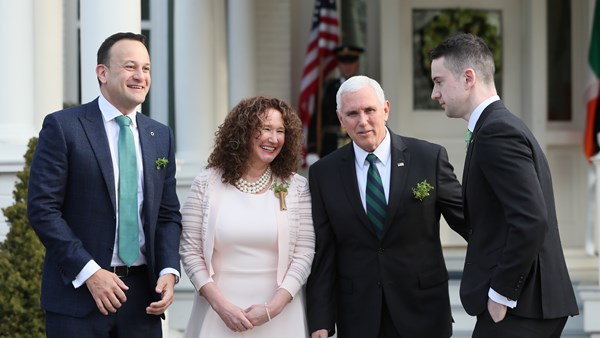 This morning, Mike Pence had breakfast with Taoiseach Leo Varadkar of Ireland and his partner, Mike Barrett, at his residence at the US Naval Observatory.

Varadkar and Barrett were invited to the VP’s home prior to the traditional shamrock ceremony at the White House.

The annual ceremony happens each year around St. Patrick’s Day and is a formal presentation of the shamrock to the US president on behalf of the people of Ireland.

It is customary for a Taoiseach to have their partner on the stage during the presentation. Today, however, it was just Varadkar.

Barratt attended the breakfast, but he skipped the ceremony for unknown reasons. (We’ll go out on a limb and suggest that maybe it’s because Trump and especially Pence are raging homophobes?)

During his speech, Varadkar briefly touched on the topic of sexual orientation.

“I stand here this morning as leader of my country,” he said, “flawed and human, but judged by my political actions and not by my sexual orientation or my skin tone or my gender or religious beliefs.”

He continued, “And I don’t believe my country is the only one in the world where this story is possible. It is found in every country where freedom and liberty are cherished.”

“We are, after all, all god’s children.”

Afterwards, Pence said Varadkar had offered “inspiring words.” Meanwhile, Varadkar tweeted that he and his partner had a “lovely morning” with Pence and thanked him for the “warm reception.”

Vice President Mike Pence invited me and Matt to his home at the Naval Observatory this morning. It’s great to be back here for a really warm reception. pic.twitter.com/Wkh2Ic8lWP

Thanks to the Vice President and his sister for a lovely morning at his home. What a great way to start this St Patrick’s weekend pic.twitter.com/2tzLEOTTpt

We’re sure they’re both very glad to have the whole thing over.