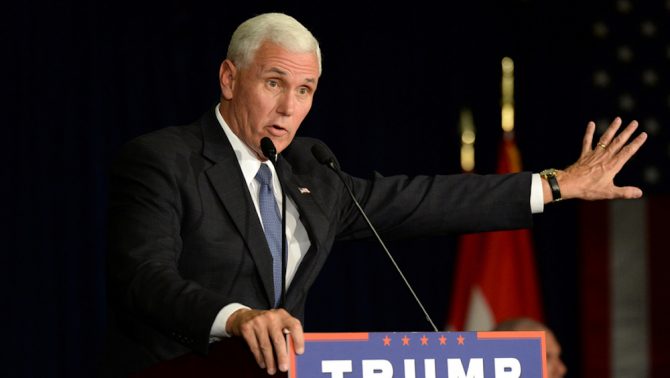 In today’s installment of people who need a new act…

Vice President Mike Pence has announced himself as the keynote speaker at the anniversary gala for Concerned Women for America, a noted anti-queer/conservative Christian fundraising group. The event will take place this evening at the Trump International Hotel in Washington DC.

“The planned speeches suggest that President Trump and his Cabinet are not shying away from events that drive revenue to Trump’s company, even after multiple stories have brought new scrutiny to the blurring of lines between Trump’s business and presidency,” The Washington Post noted in a report.

Related: White House says Mike Pence not a homophobe since he had lunch with a gay

Mike Pence, of course, is no stranger to Christian wingnut causes, having advocated conversion therapy and once boasted that he had a hard time forgiving his wife for having sex with another man before meeting him. That history fits well with that of Concerned Women for America, whose “Ruby Red and Black Tie Gala” historically raises large amounts of money for Republican politicians, even if the title of the event sounds like nightclub act of a drag queen duo.

Concerned Women for America has a long history of opposing LGBTQ rights including marriage equality as they “harm traditional,” that is, heterosexual, families. The group also opposes teaching evolution and sex education in schools, membership in the United Nations, stem cell research and favored manditory prayer in schools. In an ironic twist, the group also opposes the Equal Rights Amendment and other employment protections for women, advocating instead that women remain unemployed to raise children. The group has also claimed that Christians have a duty to spawn children, as women have a natural desire to become mothers.