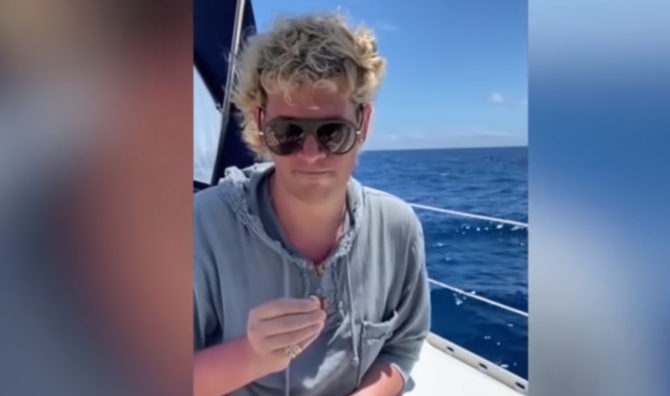 Right-wing roach Milo Yiannopoulos wants the world to know: he just shed his wedding band into the ocean. We’re guessing he also shed the last vestiges of his dignity along with it…assuming he still had any.

The self-proclaimed “ex-gay” posted a video of himself tossing what he dubbed his “sodomy stone” into the sea as a sign that he has changed his sexual orientation. He further claims it featured a price tag of $145,000. Yiannopoulos also sported a bizarre blond perm that made him look a bit like Joe Exotic.

“The more I looked at this gigantic four-karat money pit,” he says in the video, “the more I thought this is the perfect example of some of the lies I bought into in my previous life. For instance, the lie that I could be a rabid culture warrior for the right and a sodomite at the same time. I can’t. So I chartered a boat, and here we are instead, a couple miles off the coast of Honolulu. I’ve prayed, drunk an enormous amount of vodka, and I’ve reminded myself that nothing beautiful or true can be made or grow on a foundation of wickedness.”

In the description for the video posted to YouTube, Yiannopoulos also claims he has only about $800 in his bank account, which makes his actions seem all the more ridiculous. If indeed the ring was worth about $145,000, we would have suggested saving the cost of travel to Hawaii and just pawning the thing. No doubt that would have helped his financial situation.

Milo Yiannopoulos rose to notoriety as a writer for the right-wing website Breitbart, and for his defense of so-called “alt-right” hate groups. He’s faced scandal after scandal since, owing to his incendiary words, public affiliations with fringe organizations, and attacks on the queer community. His career took a nosedive in 2017 after he defended pedophiles, and after the revelation that he had not actually written his articles at Breitbart. Rather, several ghostwriters completed the articles, with Yiannopoulos acting as a figurehead. Earlier this year, he announced he was no longer gay after undergoing conversion therapy.