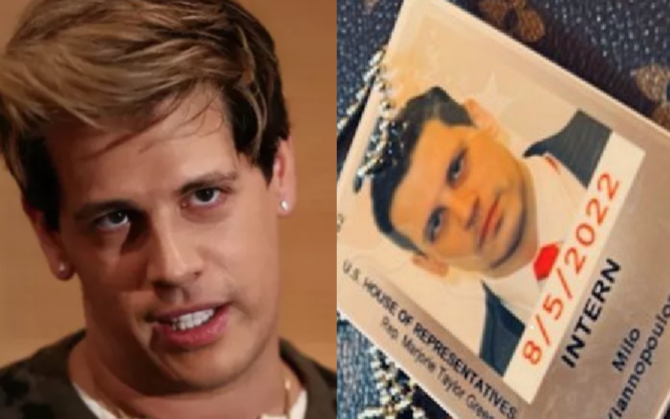 Milo Yiannopoulos has announced his latest gig, and something about it feels so right…and wrong.

Yiannopoulos took to Telegram to share the news, along with a photo of his intern’s badge.

Relate: Milo Yiannopoulos just threw his wedding ring in the ocean…along with his dignity

“I’ve finally been persuaded out of retirement. But my skills are a bit rusty, so the best role I could land was an unpaid internship with a friend. Pray for me!” Yiannopoulos said.

Yiannopoulos rose to notoriety as a writer for the right-wing website Breitbart, and for his defense of so-called “alt-right” hate groups. He’s faced scandal after scandal since, owing to his incendiary words, public affiliations with fringe organizations, and attacks on the queer community. His career took a nosedive in 2017 after he defended pedophiles, and after the revelation that he had not actually written his articles at Breitbart. Rather, several ghostwriters completed the posts, with Yiannopoulos acting as a figurehead. Last year, he announced he was no longer gay after undergoing conversion therapy.

“I was never wholly at home in the gay lifestyle — Who is? Who could be?” he said in an interview with the very Christian and very homophobic LifeSiteNews. “[I] only leaned heavily into it in public because it drove liberals crazy to see a handsome, charismatic, intelligent gay man riotously celebrating conservative principles.”

Yiannopoulos was banned from Twitter in 2016 and from Facebook in 2019. In April, Greene said during a press conference that his bans were “unjust.”