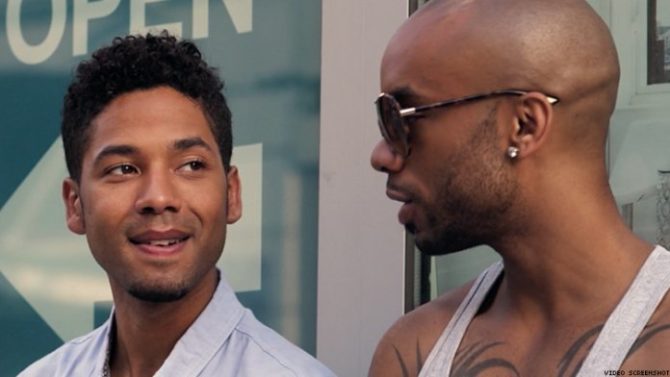 The Scandalous: The Skinny

Once upon a time, before personal issues and tabloid gossip wrecked his career, Jussie Smollett had a good thing going. In addition to his role on the soap Empire, Smollett got the chance to show off his gifts in the rom-com The Skinny from Noah’s Arc creator Patrik-Ian Polk.

The Skinny follows a group of friends attending Pride weekend in New York. Magnus (Smollett), is recovering from a nasty breakup after discovering his boyfriend of six months was actually filming sex videos in his apartment. Dejected, Magnus sets off to cheer himself up alongside the lovesick Sebastian (Blake Young-Fountain), the all-too-horny Kyle (Anthony Burrell), the socially awkward Langston (Shanika Warren-Markland) and Joey (Jeffrey Bowyer-Chapman), a spoiled trust fund baby whose money has just been cut off. Drama and hookups ensue as the sassy friends seek love and connection amid the chaos.

Few writer/directors have offered insight into the lives of gay African-American men as well as Polk. He has a great ear for witty dialogue, and understands the underlying drive for connection all LGBTQ people feel on some level. The Skinny captures the energy and excitement of Pride in a way few other films ever have. Likewise, Smollett possesses an undeniable charisma and ease in front of the camera; it’s a shame personal issues derailed what could have been a shining career. Featuring cameos by Daryl Stephens and Wilson Cruz, The Skinny captures the excitement of the friends-attending-Pride dynamic, and features enough sassy humor to keep the pace moving. We recommend giving it a watch this weekend for its humor…and for its alluring sexual charge.