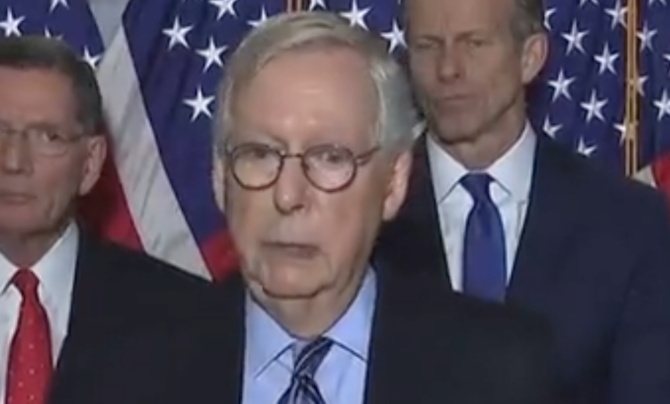 U.S. Senate Minority Leader Mitch McConnell is trending on Twitter with the hashtag “#MitchPlease” after giving a comment on voting rights, in which he seemed to imply African Americans are not Americans.

Following the failed attempt to move the John Lewis Voting Rights Advancement Act to the Senate floor on Wednesday, McConnell was asked to comment on the concerns among Black voters.

“Well the concern is misplaced, because if you look at the statistics, African American voters are voting in just as high a percentage as Americans,” McConnell responded.

One video of the exchange has already been viewed over 1.8 million times:

I need you to understand that this is who Mitch McConnell is.

Being Black doesn’t make you less of an American, no matter what this craven man thinks.
pic.twitter.com/Esk1NgIhD9

Here’s how others reacted:

Toni Morrison: "In this country, American means white. Everybody else has to hyphenate."

Thank you to Mitch McConnell for demonstrating the importance of Critical Race Theory. #MitchPlease pic.twitter.com/Dnmm65raid

Let's be clear folks, this is age old racism, stating that those who are not White Christians are not actually Americans. What if he had said "Jews," or "women," or "LGBTQIA," or "Latinx"? Support our black friends today. #Mitchplease https://t.co/IJAfuLXahp

My 100% American Father at the Vietnam Memorial Wall, honoring/remembering the men he served with during his two tours of combat duty. #Mitchplease ?? pic.twitter.com/bHBBjO2kcM

Mitch McConnell knows better than anyone that if you want white moderate voters to passively support institutionalized racism, you don’t say blatantly racist things while implementing it. Mitch made a huge mistake yesterday, and we’ll use it against GOP in midterms. #MitchPlease

According to the Brennan Center for Justice, a nonpartisan policy group, 34 laws restricting voting access were passed in 19 states in 2021.

In a statement after it failed to advance, President Joe Biden said: “I am profoundly disappointed that the United States Senate has failed to stand up for our democracy. I am disappointed — but I am not deterred.