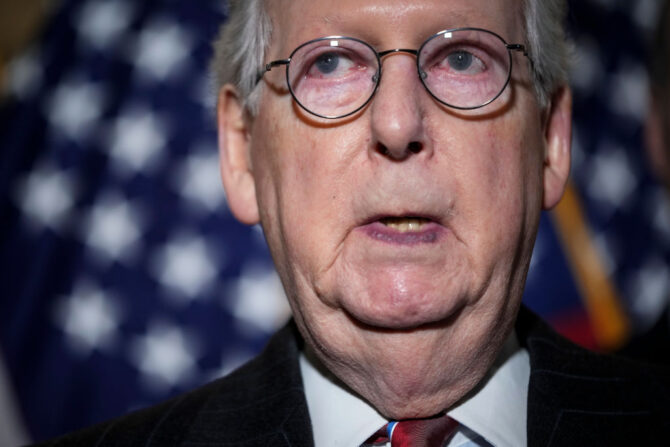 Senate Minority Leader Mitch McConnell shared his grim projection for Republicans in the 2022 midterm elections, but don’t believe a word the dude says.

Speaking at a Northern Kentucky Chamber of Commerce luncheon this week, McConnell was asked about how he thought his party might fare in November.

“I think there’s probably a greater likelihood the House flips than the Senate,” the 80-year-old senator, who has first elected in 1985, said. “Senate races are just different. They’re statewide, candidate quality has a lot to do with the outcome.”

He continued, “Right now, we have a 50-50 Senate and a 50-50 country, but I think when all is said and done this fall, we’re likely to have an extremely close Senate, either our side up slightly or their side up slightly.”

Naturally, this had a lot of people on the left celebrating. After all, if the chief obstructionist/de facto leader of the Republican party says he doesn’t think his side is going to win in November, it must be a good sign for Democrats, right?

Mitch McConnell has said he doesn’t believe Republicans will win majority in the Senate.

In fact Mitch McConnell it’s becoming clear you may lose 4 to 6 seats.

LMFAO, Bitch McConnell no longer believes winning the Senate is a slam dunk because "candidate quality."

Who else wants to see him RESIGN???

?BREAKING: Mitch McConnell said there’s “probably a greater likelihood the House flips than the Senate.”
He went on to say, “Senate races are just different, they’re statewide, candidate quality has a lot to do with the outcome.”

?He is literally crapping on GOP candidates.

Moscow Mitch is an evil genius.

While many liberals hear a guy telling his party to brace for defeat in the fall, many conservatives hear something totally different. For them, it’s rallying cry. “Get the hell out and cast those ballots,” McConnell is saying. “Things are extremely close. All we need is one more seat and we’ve got this.”

In other words, it’s a cynical “get out the vote” strategy. And it’s one that tends to work on GOP voters particularly well. (It’s how we ended up with Donald Trump, after all.)

Don't listen to Mitch McConnell. By downplaying Republican odds to retake the Senate, he is trying to lull Democratic voters into a sense of complacency. Don't fall for it. Keep fighting & send him into retirement. After all, he vowed to retire if they don't retake the Senate.

Please remember that Moscow Mitch McConnell is one of the greatest evils in US and world history. Literally anything he says is either a lie or a plot, so if he predicts that GQP will lose Senate seats, it’s him trying to get Democrats to be complacent. Do not fall for it.

Why is Mitch McConnell publicly admitting there’s a strong chance Republicans will lose the Senate midterms? He’s perhaps hoping to rally the troops. And win or lose, he needs to come off like he at least knows what’s going on, in order to retain his political relevance.

McConnell is right about one thing. Republicans do have a serious issue with “candidate quality.”

If McConnell really cared about their “quality”, however, he wouldn’t be supporting a bunch of them. He endorsed Walker way back in October, saying he’s “the only one who can unite the party.” And a PAC he’s closely tied to just announced that it will be funnelling $28 million (yes, $28 million) worth of TV and radio ads to support Vance.

Related: J.D. Vance opposes protecting his own interracial marriage because he hates gay people so much

The reality is Democrats are extremely vulnerable and McConnell knows it. The latest projection from gay statistician Nate Silver has Republicans favored to win the House and Democrats only slightly favored to keep the Senate. And with the midterm elections still 80 days away, there’s still plenty of time for those fortunes to change. Even though he says the opposite, McConnell appears to be betting on Republicans squeaking out a victory.

While you’re here, watch McConnell’s super tense sit-down with Axios reporter Jonathan Swan back in April when Swan questioned his “moral red line” in front of a live audience: