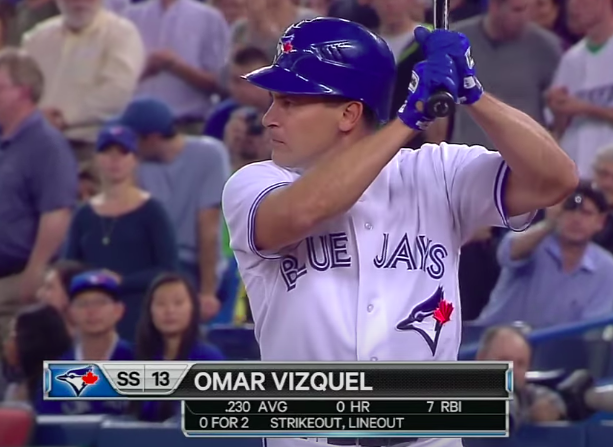 Omar Vizquel is one of the greats in Major League Baseball. A Hall of Fame candidate who played 24 seasons for six clubs, he’s widely considered one of baseball’s all-time best fielding shortstops. But he seems to be going through some stuff right now that, if true, has the potential to blow up his entire legacy.

The 54-year-old was just slapped with a lawsuit accusing him of sexually harassing a team batboy in 2019.

The 25-year-old plaintiff, who is autistic, alleges that during his time as a batboy for a Chicago White Sox minor-league team, Vizquel, who was the team’s manager at the time, told him he “liked guys” then demanded he shower with him after a game.

According to the federal lawsuit, Vizquel allegedly handed the young man a bar of soap then ordered him to “Wash my damn back!”, making him feel “humiliated, intimidated, and frightened of what would happen if he disobeyed.”

The lawsuit continues, “As he washed Vizquel’s back, Vizquel’s hands were in front of his body near the level of his waist.”

The alleged back-washing lasted for about a minute before Vizquel allegedly turned around and exposed himself to the young man.

“Vizquel’s penis was fully erect,” the lawsuit states. “He made no effort to hide his erection … rather, he proudly displayed it.”

The plaintiff says he reported the incident, which happened in August of 2019, to two other employees, but they just laughed it off, telling him, “Everything that happens in the clubhouse stays in the clubhouse.”

A few months later, the White Sox announced Vizquel was no longer working with the organization, although it didn’t say why.

In a statement released this week, the organization explained:

After first learning of an alleged incident in late August 2019, the Chicago White Sox conducted an internal investigation that resulted in the termination of the organization’s relationship with Omar Vizquel. Because this is active litigation, at this time the White Sox will not comment further regarding the allegations included in this lawsuit.

In addition to accusing Vizquel of sexual harassment, the plaintiff is also accusing the White Sox of violating the Americans With Disabilities Act. He is seeking back pay, as well as compensatory and punitive damages.

But Vizquel’s troubles don’t stop there.

Last week, he was inexplicably let go from the Mexican Baseball League’s Tijuana Bulls after two seasons as the team’s manager, according to ESPN. A vague press release said he was taking time to “attend to personal matters.”

And last year, Vizquel was accused by his estranged second wife, Blanca, of physical abuse. He was arrested but not charged. The couple is now in the process of getting a divorce.

Vizquel has denied all of the allegations against him, and no criminal charges have been filed, but the investigation by MLB remains open.