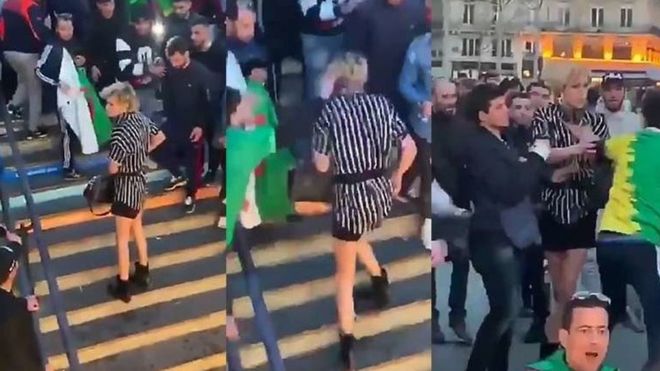 A 31-year-old French transgender woman named Julia was attacked this past Sunday by three men who jeered at her, tussled her hair, pushed, pulled and swung punches and kicks at her as she tried to walk through crowded metro steps at Paris’ Place de la République. The violence was caught on camera (below).

Eventually transit police intervened, getting her to safety, but even they reportedly called her “Monsieur” and told her “not to dress like that,” according to the BBC. Julia said that one man exposed himself to her and others threw beer on her as she tried to get past them.

The attack occurred during a rally in central Paris against Algeria’s ailing president who recently resigned amid protests against corruption in his home country. The men reportedly told Julia, “You’re a man, you’re not going anywhere, you’re not coming past,” and taunted her in Arabic.

Here is video of the attack, which has since gone viral since images of it were shared by the leader of the French LGBTQ activist group Stop Homophobie.

Since then, Julia has appeared on French TV and radio. She told interviewers, “The violence against this [transgender] community takes place every day. But some people won’t have the strength that I have and they’ll be destroyed by these attacks.”

The BBC reports, “Julia later made clear that the attack had nothing to do with the Algerian community but was carried out by ignorant people, regardless of their origin or religion. The Paris prosecutor has opened a case for violence due to sexual orientation and gender identity.”

Related: Japan has a law requiring sterilization of transgender citizens

Unfortunately, the Paris attack is just an illustration of the ways trans people are targeted for violence by citizens and police alike. Discrimination of this sort is what makes events like the recent Trans Day of Visibility and the upcoming Trans Day of Remembrance all the more necessary.