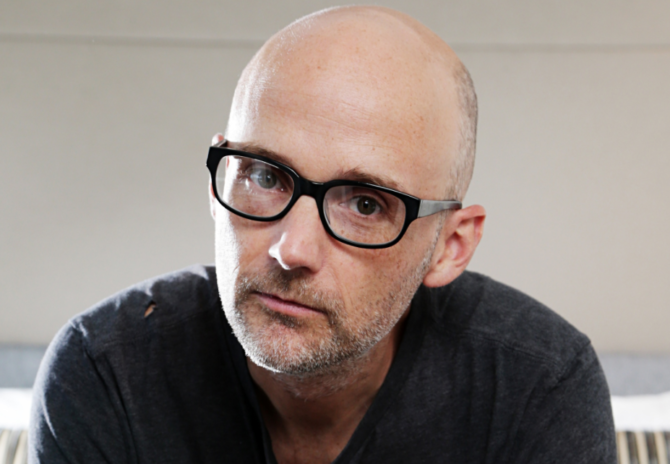 A reality TV star is President of the United States, so a DJ may as well be a spy.

Moby has dropped a bombshell on Facebook, claiming that he has received inside information about the Donald Trump/Russia dossier that was leaked in January. But before you go crying “fake news!” let’s just hear him out.

In the social media post, Moby says that over the weekend he talked to “friends who work in DC” and can “safely (well, ‘accurately’)” confirm a number of rumors that have been swirling around the President.

“The Russian dossier on Trump is real,” he writes. “100% real. He’s being blackmailed by the Russian government, not just for being peed on by Russian hookers, but for much more nefarious things.”

Moby is referring, of course, to the document that sent the meme’ing forces into overdrive to uncover every last golden shower joke the collective consciousness could turn out.

What sort of “nefarious things” you ask? Moby warns that Trump is waiting for a reason to go to war with Iran, and that he’s been in bed (so to speak) with Putin and the Russian government “since day one.”

“I’m writing these things so that when/if these things happen there will be a public record beforehand,” Moby adds. “These are truly baffling and horrifying times, as we have an incompetent president who is essentially owned by a foreign power.”

Moby may not be the most trusted source in political intrigue, but it’s important to note that he isn’t exactly over the cuckoo’s nest here. CNN reported last week that U.S. investigators have corroborated some of the details of conversations outlined in the Trump/Russia dossier. Today, the New York Times claimed Trump’s National Security Council considered intercepting an Iranian ship and conducting a search for weapons on board. And it’s no secret that Trump makes many powerful players on the Right like the Koch brothers mighty uncomfortable. 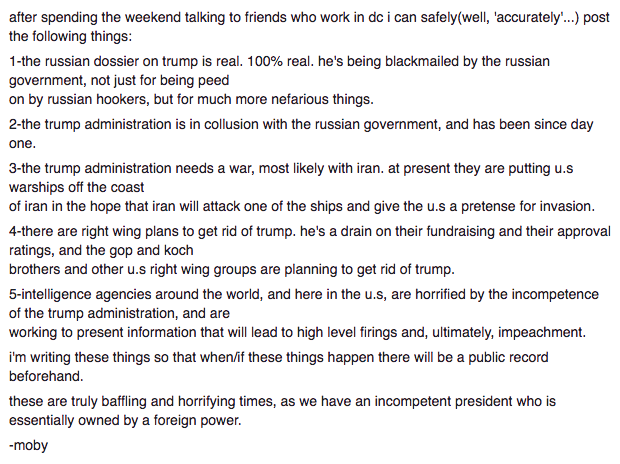 after spending the weekend talking to friends who work in dc i can safely(well, 'accurately'…) post the following…