Colby Melvin is not your ordinary underwear model. An oil rig worker in his hometown of Mobile, Alabama, at the age of 22, he was outed and moved to Texas, where he was discovered by a local talent agency, going on to become one of Andrew Christian’s featured models.

He quickly broke through by starring in Todrick Hall’s Mean Boyz and Wrong Direction by Disclosure. Approaching 30 and now living in LA, he’s launching his own fashion branding, Petting Zoo, and lining up more video work.

Colby took time out of his busy schedule to chat with Queerty about his dating, HIV testing and owning his own sexual health. 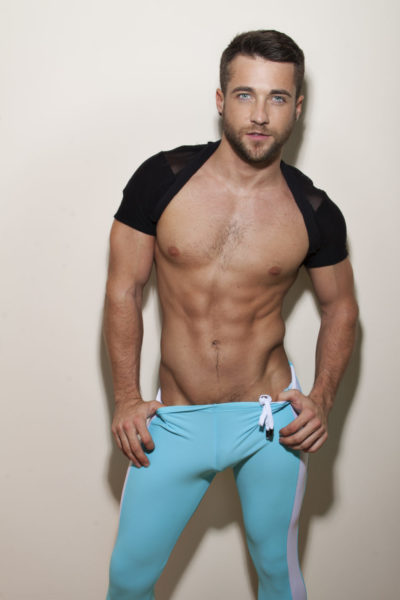 Living in the conservative south, I was never really comfortable with my body. Before I came out I never really got much attention. I came out at 22 while living in Alabama. I was fired and lost everything when the company I was working for found out I was gay. I had to start my life completely over. At the time I was completely devastated. However it wound up being the biggest blessing ever. It gave me the freedom to explore and reinvent myself. At first I was super shy and not very confident in the way I looked. I started go-go dancing and overtime learned to be comfortable in my own skin. It was incredibly liberating. When I started modeling I never expected it to result in me getting to travel the world. I am incredibly lucky to have seen more of the world than most people ever get to see in their lifetime and I’m not even 30 yet.

What was it like to work with Todrick Hall on Mean Boyz?

I met Todrick in passing when I first moved to LA. Then one day I was at a drive-through getting food when I received a call from a number I didn’t recognize. The person started talking in a British accent and started saying very random things. He must’ve caught me at a good time because I went along with it. After a few minutes he said this is Todrick and my willingness to play along meant we would be friends. A few months later he texted me around midnight asking if I was available the next day for a video. I showed up without a clue what we were about to shoot. We scripted it and shot it that same day. We filmed until about 5 am. Everyone in the video was so much fun to work with. My one regret is that we haven’t made it into a full length film.

Models face a lot of pressure to stay young and in shape.

I never considered myself attractive. When I started underwear modeling it was all about personality for me. I’m only 5 foot seven and never thought in my wildest dreams I could ever have a career in modeling. In reality I’m just another generic white boy. Thanks to social media, modeling is no longer about just being a static image. People want to see the personality behind the image. I think I was so successful because I never took myself seriously. My entire career has been about having fun and never taking myself seriously. If you take yourself seriously no one else will. We all have a career shelf life. For a while I had multiple video and photo shoots every week. I have taken a break from modeling over the past year to focus on myself and to give people a break from seeing my face and butt take over their newsfeeds, but I’m back in front of the camera and people can expect to see new photos soon! Modeling is all about looking into the camera like looking directly into someone’s eye and creating an emotion. If you don’t actually feel it and connect it will read in the pictures. Regardless of what you look like, you can create great pictures by simply having the confidence in yourself. People have said I’m too short, I am too skinny, I am too big, I look too young without facial hair or two old with facial hair. I’ve learned you will never make everyone happy so you shouldn’t live for them. What you look like will change and fade but who you are will last the rest of your life. So that is what you should focus on; being a positive, kind person so that you leave the world a better place because you were in it.

What do you like most about being a young gay man?

When I came out I lost a lot of friends and family, however I was immediately embraced by the gay community. Now, I am proud to say my friends have become closer than most of my family. I love that as a gay man I have a chosen family which I’ve learned is stronger than just a blood connection to someone. 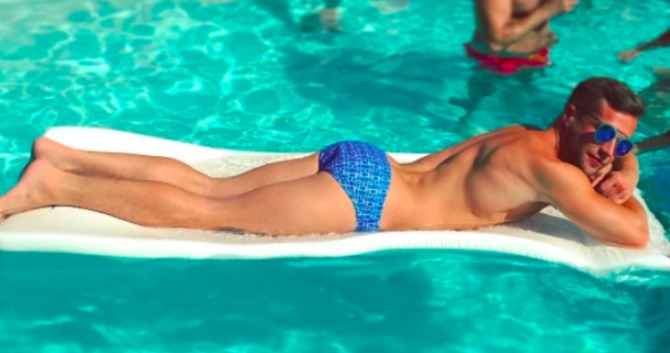 Gay men still fight stigma and ignorance about HIV. How do you own your own sexual health, and what’s your advice for other guys?

When I first came out I was scared to get tested. I hadn’t really received much education on how to take care of myself. Over the years I’ve learned and become much more comfortable talking with my doctor and regularly getting checked. I was excited to work with OraQuick for their Own It! campaign because the more ways guys can get tested the better, and at-home testing is a fairly new way to do it that I wanted to help promote.

How and where do you get tested these days?

There is an STD clinic attached to my primary care physician, so that makes it very convenient. I get tested every 1-3 months. What I love about OraQuick is that you can test yourself for HIV wherever you are and get results in 20 minutes using the same test that the clinic would use — no fuss, no muss.  For times when I’m traveling a ton or just don’t have time to get to the clinic, it’s a great option.

What other models and actors do you like and aspire to?

I think George Takei is one of the best examples of a positive influence on our community. He has lived through so much and had to overcome so much adversity and still is a smiling happy person. I can only hope that one day I would be able to have as much influence on the world as him. My aspirations are much bigger than modeling. I want Colby Melvin one day to be a brand, not just a name. I want it to represent a gay lifestyle: clothing, skin care, home decor, travel, fitness, and mental health.

You’ve talked about how supportive your mom has been. How does she feel about your nude pics online?

Trying to pack but I keep getting distracted ?

At Queerty, it’s amusing how many underwear lines hit us up to showcase their models and their styles. Sometimes it seems gay men must have big underwear budgets.

The underwear industry has taken a big dip in sales in the past couple of years. When I first started modeling the men’s designer underwear industry was just coming to the forefront. So my success was mostly due to timing. That and the amazing director Brad Hammer cast me in marketing videos and helped me make my career what it is today. He’s responsible for pretty much every gay viral video out there. We have continued to work together even to this day. I describe my designs as a static juvenile sophistication. Basically as if an adult went back to kindergarten. That includes way more than underwear. To succeed as a brand today you can no longer just be an underwear brand. You have to diversify your product catalog. Hopefully when I am finally able to launch this next line it will include underwear, swimwear, shirts, shorts, pants, and more!

How’s your dating life been since your breakup last year?

My last boyfriend is the first man I ever really loved. The hard part about the break up was that we still love each other. We just couldn’t be together because of other circumstances. It would have been much easier if he would have been an asshole or done something wrong, but he really is an amazing man. He taught me what it really meant to be loved by someone. Since then I have taken time to be comfortable with just myself. For the first time in my life I can honestly say I am comfortable with just myself. This is the longest I’ve been single since I came out. I have grown a lot emotionally. I am approaching each guy that I meet with a better sense of what I want and not just jumping into a relationship because I am lonely. Because of my very public social media presence, I struggle with finding a man that wants to do more than just have sex. Plenty of men see me as a sex object, but few are really interested in getting to know me and pursue something past the bedroom. Don’t get me wrong, I have had some amazing sex in my 20s, but I find sex with someone that I have a real connection with much more for fulfilling than just a random hookup.

#tbt who needs their pipes cleaned

Hands-down Sydney, Australia. I went for Marty Gras two years ago and had the time of my life. The last two days of my trip I spent researching what it would take to move to Sydney. If you’ve never been, it’s my number one recommendation in the world.

Last Q: What are you reading right now?

I love listening to audio books while I work. Currently, I’m listening to Chelsea Handler’s My Horizontal Life. It is seriously the funniest book I’ve ever come across. Other than that, I like listening to a variety of tropical house podcasts on SoundCloud.