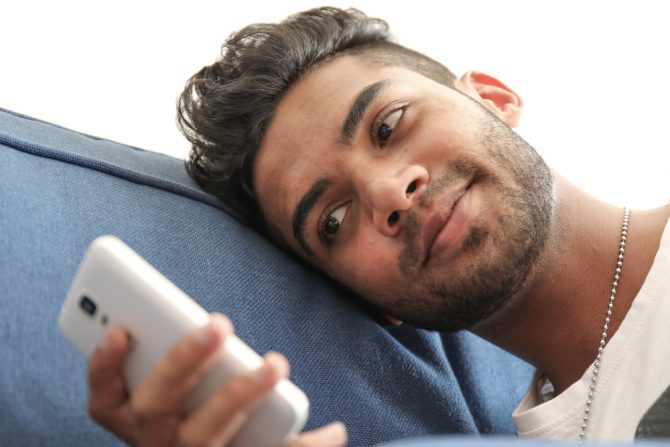 Grindr users have enough pitfalls to worry about without the concern that the cute guy they’re talking to is actually a spambot hellbent on spreading viruses and phishing for personal info. But one guy has sleuthed out a clever way of telling the real users from the automated ones.

“Perhaps it’s already obvious to everyone, but I finally found a use for ‘X viewed you’ feature,” he wrote on Reddit. “Before I even look at an incoming message or tap, I first check the ‘viewed’ list, and if the sender of the text is not on it, it’s a bot.”

“That may not work for those of you who get dozens of views per hour,” he added, “but it’s never been my problem, so that’s my new Grindr routine.”

When one commenter listed “Joined recently, no distance, and clichéd bios” as other telltale signs of a bot, the original poster begged to differ. “A lot of guys (including myself) have distance checked off,” he responded. “And yes, 95% of [the] time, you can tell the profile is a bot, but I was getting annoyed at myself for answering the other 5%. A nice pic and wishful thinking would do that to me.”

Another commenter, meanwhile, reiterated the strategy Queerty covered in 2015: “What I do is break the traditional flow of conversation. The main benefit is it makes you sound more interesting to most (real) guys. But a side benefit is the bots can’t deal with it.”

Related: Compelling new study offers yet another reason to delete your Grindr account

And yes, spambots have been a problem since 2015. That’s when a Grindr spokesperson assured PinkNews that security improvements were a “top priority” for the app developers.

“In fact, we devote significant engineering resources and expertise to addressing the spambot issue. We use automated tools to detect spambots, and our team of moderators diligently track and ban these kinds of spam profiles,” the spokesperson continued.

“We know that companies like ours can never be complacent about spambots — and want to assure users that we have more tools in development — including authentication and authorization tools — that we believe will significantly reduce the spambot issue.”

Anyway, one Reddit user has his own reason for hating bots. “They are very bad after sex, no cuddles,” he wrote. “They don’t deserve my love, miserable robot f*cks.”