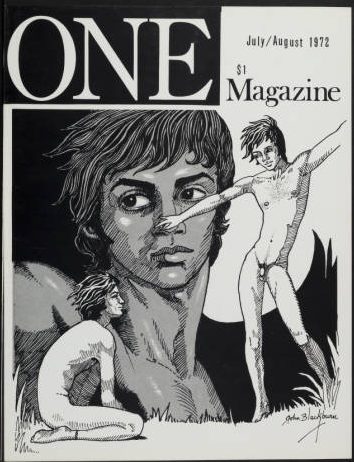 This is the tenth and last in our series of ONE magazine cover stories.

Volume 16, Issue 4: The Final Issue – From Homosexual to Gay

Reading through this final issue of ONE, it doesn’t seem at all apparent that the editors in fact knew it would be their last. The editorial letter, though, a small masterpiece in its own right, couldn’t have been more perfect for a publication that launched itself in the early’50s as “The Homosexual Magazine.” Now, in 1972, it was ready to graduate to a new word: gay.

We’re reprinting the entire letter, in which editor Jim Kepner both lays out the drive behind what we’ve come to call identity politics while managing to provide as much present-day inspiration as one of those rousing graduation speeches that go viral each May.

Despite certain pious old sayings, which are mere whistlings in the dark, names really can hurt us. Slanderous group names – N___, Savage, Injun, Cocksucker – stab at the very soul unless we desensitize ourselves, a costly operation at best.

Members of the comfortable majority need rarely be concerned with identity (fairly well packaged for them by their parents). But what those who differ are called, or what they choose to call themselves, tends considerably to shape their behavior, their goals and their self-respect. Therefore, last decade, when militant young Blacks rejected the term Negro as only a euphemism for N___, it hardly mattered that Negro and Black were etymologically similar. Etymology rarely determines meaning, and the right to choose one’s own name is minimal for self-determination, and the key to finding one’s own soul.

Last November, at a historic statewide Democratic conclave, opponents of a resolution on the Integrity of Gay Life Styles asked this writer why we weren’t satisfied with their preferred name for us: Homosexual.

That name was laid on us in 1869 by an obscure German sexologist who was busy labeling different kinds of sex perverts: coprophiliacs, necrophiliacs, sadists, pedophiles, and as many subgrades of male or female homosexuals as he could box in. He gave “The Love That Dared Not Speak Its Name” a label fit for specimen bottles.

In 1969 the Christopher Street resistance marked the liberation of America’s 20-year-old Homophile Movement from heterosexual authority, and put forward the name Gay as a banner for the “new consciousness” – which of course was not entirely new.

The word Gay, like Homophile, had been around a while, and once had trivial or evasive meanings – but it is our word, and we say, like Alice (Lewis Carroll was nobody’s fool), that it means what we will decide it means. This oughtn’t disturb lexicon purists, since dictionaries have ignored both Gay and Homophile. (They haven’t even given us our fair share of the word queer.) We have only conflicting reports as to what Gay meant in 1920, and no idea if old Walt Whitman meant anything special when he wrote from Camden of missing New York’s Gay crowd.

As we reject the notion that we are poor creatures who only happen to engage in certain sex acts, we are actually using this word and others in a worldwide effort to define ourselves.

Gay and Homophile are not terms meant to deny the sexual part of our lives (we affirm sensuality as a positive good, not just instrumental to baby-making). But they do assert that what we are is something deeper than just how or whom we have sex with. Whether we are made or born, Being Gay, or Being Homophile, if you prefer the more conservative term, is at the core of our spirit, our emotionality, our aesthetic, our conscience.

We each grow up like foundlings in the home of strangers who try to shape us to their way. Even when we individually go looking for our own, many of us are still conditioned to the het rules, looking often for what amount to pseudo-heterosexual relationships. But when we finally find ourselves, whether that happens at age 6 or 60, we often find ourselves gasping: “This is what I really AM,” or “… what was in me all along!”

To become Gay is to declare ourselves free of the sexologists, to give up seeking our identity in their tests and charts. It is to wipe aside all considerations of “why the robin’s breast is red” (do hets ask themselves what made them that way?) and to concentrate on trying out our wings.

Only after we free ourselves of heterosexual definitions and expectations can we begin to discover what it really means to be Gay.

And there you have it. What else can we say except: Stay gay, friends.