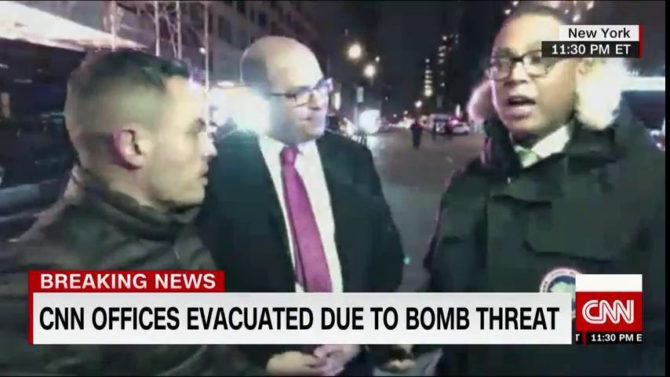 Welcome to another day in Trump’s America.

During last night’s live taping of Don Lemon‘s show “CNN Tonight”, the network received a call from someone who said they had planted five explosive devices inside the building.

Moments later, the building’s fire alarms sounded. Everyone evacuated and Lemon’s show, which had been on a commercial break, was yanked off the air, replaced with 30 minutes of pre-recorded programming.

The threat was made by someone described as having “a Southern accent” and was called in mere moments after Donald Trump unleashed a string of unhinged tweets once again accusing the media of being the “enemy of the people.”

FAKE NEWS – THE ENEMY OF THE PEOPLE!

After about 30 minutes, CNN went live from the street outside the Time Warner Center.

Police and fire department trucks could be seen blocking vehicle and pedestrian traffic. A bomb squad remained on standby outside the building while officers searched the premises.

“All of the employees, all the people who were in the building as we were doing our live broadcast are out of the Time Warner Center now,” Lemon added.

Hours later, NYPD issued an all-clear, saying the building was safe to enter and the bomb threat was not substantiated.

“The NYPD has now given us the all clear, and employees have been permitted to return to the building,” CNN Worldwide president Jeff Zucker wrote in an internal memo to staff. “The building is secure and safe for everyone to return in the morning.”

“We appreciate the swift action by the local authorities, and the patience and professionalism of all the employees who were impacted.”

This is not the first time Lemon has been targeted with threats of violence.

And just last month, people called for his lynching after he called radicalized white men the “biggest terror threat in this country.”