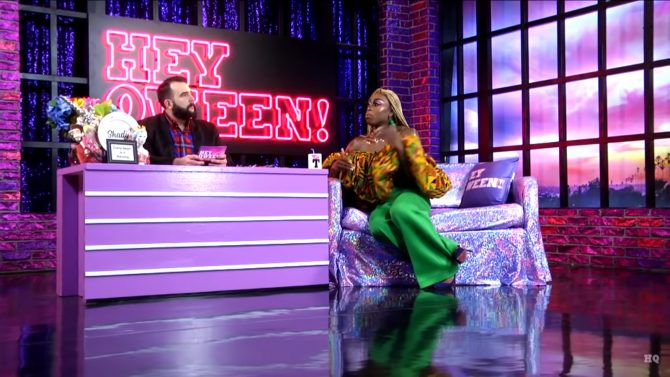 Drag star Monique Heart, known for her appearance on RuPaul’s Drag Race Season 10, has opened up about her own coming out, and how she survived conversion therapy.

While chatting with Johnny McGovern on the digital talk show Hey Qween!, Heart revealed that her mother enrolled her in conversion therapy just after Monique (real name Kevin Richardson) came out of the closet. The pair even relocated from New York to Missouri as part of the “treatment.”

“I moved to Kansas City in 2008,” Heart says, “and I enrolled at the International House of Prayer, where they do 24/7 prayer…I was like ‘I struggle with homosexuality,’ and they call it ‘SSA,’ Same-Sex Attraction. So then after they read it, they were like when did you last act out? And I had just sucked this man’s d*ck–his name was Ryan. He worked at TGI Fridays. I was working there. He was very cute.”

Related: The trailer for ‘Secret Celebrity Drag Race’ has arrived

“So they put me into this inner healing group called Pure Heart, where it was like restoration from the Beatitudes and all this other bullsh*t,” she continued. “The reason that I am gay is not because my father was not there and I had an overbearing mother. My friend who is in a family of five children is gay. So if it’s a parenting issue, why ain’t the rest of them homos? It was all of this BS.”

Heart spent six months in the program before going on to lead an intensive breakout group called “Living Waters.” “The last time I was leading the group,” she recalls, “my best friend Junior had broken up with his girlfriend. She said some shady sh*t to him. He was like I’m at a breaking point. I’m going out to the club. You wanna go? And this was like Monday night after praying the gay away. I was like yeah bitch, I’m going! So sure enough, for like six months I would pray with the homos, and then me and my friend would go to the gay bar afterward.”

“It was horrible,” Heart concludes. “I mean coming out is not easy, but it was amazing to be in a room with other people who identified like you, and I had never had that experience, so it was just transformative in a way.”

Heart spent four or five years after conversion therapy abstaining from sex with men. That changed after she enrolled in beauty school and befriended two other out gay men. Ultimately, their encouragement allowed Heart to make peace with God & her spirituality and accept her sexuality. The practice of conversion therapy, meanwhile, has become widely discredited by international psychological and medical experts as ineffective and torturous for queer people to endure.