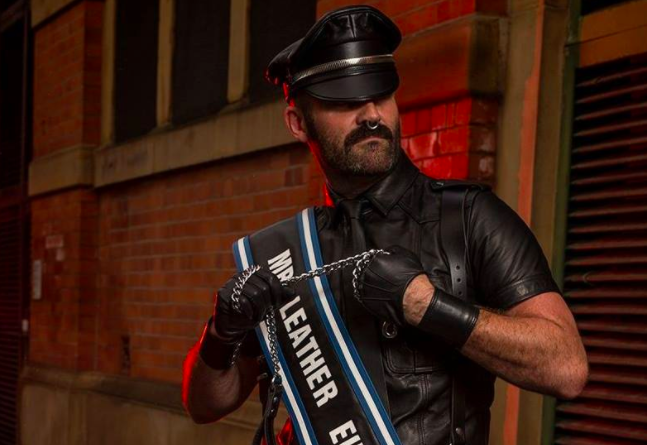 Don’t let the bulging biceps, septum piercing, or leather gear deceive you. Underneath the tough exterior, Joe King has experienced his fair share of heartache and pain.

King was named Mr Leather UK at the end of 2015 and went on to become Mr Leather Europe 2016. Last month, he competed in the International Mr Leather (IML) competition in Chicago, during which he made a big reveal on social media:

“In 2001, I found myself in a relationship with a man who could only be described as a malevolent bully.”

The man he was with, King writes, was “emotionally, mentally and physically abusive and systematically broke me down over the next five years, to a point where my confidence was at an all-time low.”

Over the course of the relationship, King says he was isolated from his friends and had a difficult time coping with the situation he was in.

“I secretly fantasized in my mind about the day I would be free of him,” he says, “but I was so exhausted that I knew I didn’t have the strength to face the fury that he would direct at me.”

In 2006, after five years of near constant abuse, he finally walked away. But his troubles were far from over.

He ran up debts in my name, refused to pay his half on our mortgage and got us into arrears and the house got foreclosed, gave my dog away, sold my car and kept all my possessions.

He had me arrested for a fictitious assault, harassed my family and employer and made up horrible rumors about me. In the end the harassment got so bad that the police arrested him and kept him in cells for over two days.

In the end I had lost everything I owned and worked for my whole life.

King says it took eight years for him to fully “unpick his impact on me and to come to terms with what I’d gone through.”

Then in 2015, he tested positive for HIV. He had been exposed to the virus by his ex. He knew this while they were together, but he had been too afraid to get tested after they split up.

“The past hit me like a train,” he recalls. “I would be forced to think about him, inside my body was a permanent reminder of this ‘man’, a living scar.”

“I knew I should’ve been tested,” he continues, “and thank God I only ever played safe, but I was so traumatized by my experience, I couldn’t bear to revisit the past. And now there was no choice, I had to face it.”

King says he found comfort in the leather community.

“The acceptance, love and support I received gave me the strength and the courage to get through,” he says. “I was welcomed with open arms and I met other men who had had similar experiences and fought similar fights.”

“For the first time in 15 years I felt like I belonged … I had found, a community that during all these years I had never known existed.”

Today, King describes his health as “excellent” and his viral load undetectable.  And for anyone who may be in an abusive relationship, he has the following piece of advice: “You must always remember you don’t need to live that way. You can find peace an happiness again.”

“You might think you don’t have the strength to escape,” he adds, “but I can tell you from experience, it’s easier than the daily endurance of living with an abuser.”

Football star poses naked in show of support for his spouse