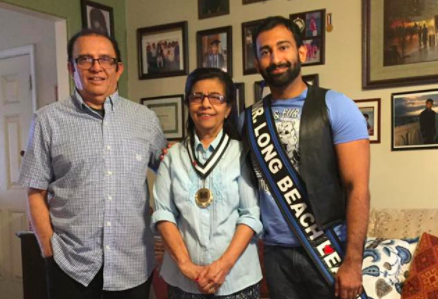 Meet Ali Mushtaq. The 27-year-old Pakistani-American is the current reigning Mr. Long Beach Leather. And his family couldn’t be prouder.

Mushtaq has lived with his grandparents, Ruby and Abdullah Atcha, in Anaheim since he as 11 years old. He came out to them when he was 15.

Though it took some time for him to get used to it, 73-year-old Abdullah says his grandson’s sexuality is a non-issue these days.

“I don’t think it’s easy to be a gay person anywhere in the world,” he tells the Los Angeles Times.

And as for the whole leather thing, that’s not a big deal either.

Mushtaq recalls the first time he came home from college with a bag full of leather gear.

“My grandma was like, ‘Why do you have ropes?'” he says. “’Why are you going to the hardware store all the time?’”

“We are learning from Ali,” Ruby chimes in. “Everybody learns from everybody else. Someone else learns from you, and it keeps on going. Even though we are old, we are still at that phase of learning and understanding this generation.”

At the end of the day, Mushtaq’s grandparents say they’re proud of their grandson’s achievements, including being crowned Mr. Leather and working towards his PhD, because he exhibits their four core values: Being true to oneself. Being good to others. Working hard. Getting an education.

“People right now have this idea that Muslims … are the enemy, the devil, that they’re this vilified group that’s out to take out democracy,” Mushtaq says. “And it’s like, no, we’re here, we’re equally part of this country, and we’re here on the forefront of progressive change in our communities.”

“I couldn’t be the out and proud leatherman I am today without the support of my family.”