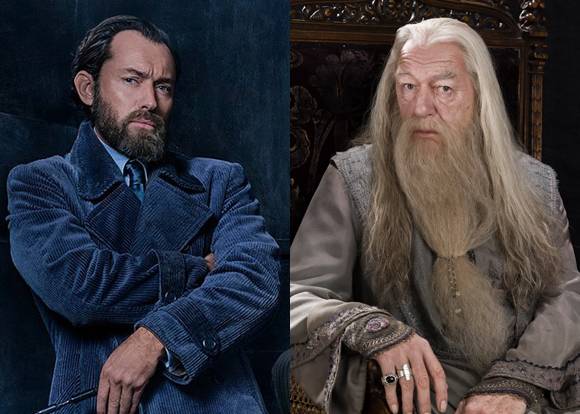 In the red corner: A feverishly committed Harry Potter fan base who hold the word of J.K. Rowling as something between revered and divine. So, no pressure or anything.

In the blue corner: A muggle named J.K. Rowling, a multibillion-dollar fantasy empire, four remaining films in the Fantastic Beasts sub-franchise, and all the creative and business interests involved in such a monumentally high-cost endeavor.

Until now that boxing ring has been more like a tea party, but with the news this week that the gay wizard Dumbledore–defiantly outed by Rowling in 2007–will be shoved in an all-too-familiar Hollywood closet when Jude Law picks up the wand, the gloves are suddenly off, or on. Sports metaphors don’t come easy.

For the first time, Rowling has turned her biting wit, usually reserved for the likes of Donald Trump, on certain members of her own fan base, who almost certainly deserved it.

Her argument, essentially: “Just quiet down and wait for the next films.”

Scott Mendelson over at Forbes isn’t buying it, and his analysis makes a lot more sense–with this much money on the line, the films need all the overseas box office they can get.

And a lead character hunting down the man he once loved is a big risk, especially in overtly antigay countries with governments that would ban the film without batting an eye.

“Russia almost banned Walt Disney’s Beauty and the Beast last year over a blink-and-you-miss-it same-sex waltz between Josh Gad’s LeFou and a random male extra. China let it through, but they have been known to heavily censor gay-friendly cinema (Cloud Atlas was cut by around 40 minutes back in early 2013)…While Crimes of Grindelwald with an overtly gay Dumbledore could become an event among respective demographics to compensate for any lost domestic viewership, that is A) no guarantee and B) unlikely to compensate for lost foreign sales should the film get banned in various markets.”

So while Rowling’s “just you wait until the full series materializes” plea may be sincere, it is by no means a guarantee that the films will address the subject.

“Maybe a sky-high gross for Fantastic Beasts: Crimes of Grindelwald will encourage the powers-that-be to be a bit more upfront in the third, fourth and fifth movies. Maybe the plan was always to introduce Dumbledore in an asexual fashion and then delve into his romantic relationship with Grindelwald in a later chapter. But there is a real financial risk for a movie like Fantastic Beasts having an openly gay lead or major supporting character.”

All of which begs the question: If Rowling had known in 2007 that in 2018 she’d be two-films deep in a franchise about a young Dumbledore, would she have told her fans she “always thought of Dumbledore as gay. Dumbledore fell in love with Grindelwald, and that added to his horror when Grindelwald showed himself to be what he was”?